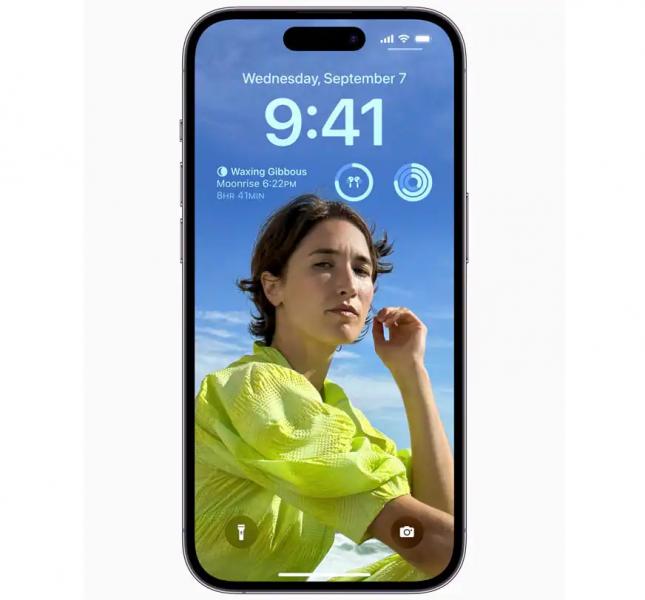 Not only does Apple offer us the update to the new iOS 16 system, but also the one to stay with the current version going from 15.6 to 15.7.

Yesterday, Monday, Apple released two updates to its iOS mobile system for iPhone with new security and privacy features. iOS 16 protections aim to prevent the infiltration of spyware and to replace the passwords that allow hackers to break into your accounts.

Of all the new features, the lock screen gets the biggest change.

Offering deeper integration, users can add a depth effect to their lock screen photo and change the time, font and character style to their liking.

It will also be possible to install new widgets to easily obtain useful information at a glance.

The new interface of the lock screen

More secure, the Lock Mode temporarily disables certain iPhone features that can be exploited by spyware. By blocking them, vulnerability is greatly reduced, especially for people at risk, such as journalists, activists or politicians who are often the target of rogue states.

Along with updates like these, Apple is introducing “Security Rapid Response,” a new option that lets your iPhone install security patches as soon as Apple releases them. With these rapid updates, the Apple giant wants to push important security updates to its iPhones without having to install a full update each time.

With this strategy, the group hopes to catch hackers off guard by closing vulnerabilities as quickly as possible. Computers' new macOS Ventura system will also provide its owners with quick security answers.

Safer Browsing in Safari with Passkeys

Browsing in Safari is even safer with passkeys, a next-generation credential that can't be phished or leaked, making it safer and easier to use. Designed to replace passwords, passkeys use Touch ID or Face ID for biometric verification, and iCloud Keychain to sync between iPhone, iPad, Mac and Apple TV with end-to-end encryption ending.

Created as a joint effort with the FIDO Alliance, Google and Microsoft, the passkeys will work in apps and on the web, and users will be able to log in to sites web or app on non-Apple devices using only their iPhone.

Let's stick with the Safari browser which adds groups of tabs (websites) to share with friends and family, making it seamless to see what others are looking at.

With improved car and transit navigation and multi-stop routes, drivers can easily create routes with multiple stops and automatically sync them to their Mac computer to iPhone when they're ready to go. Transit directions now show the cost of a ride, and users can add transit cards to Wallet to view balances and top up transit cards – all without leaving Maps ( Maps).

Finally, to avoid transferring content to the clipboard from application to application, iOS will ask your permission to paste or not the information.

The Maps application on iOS 16