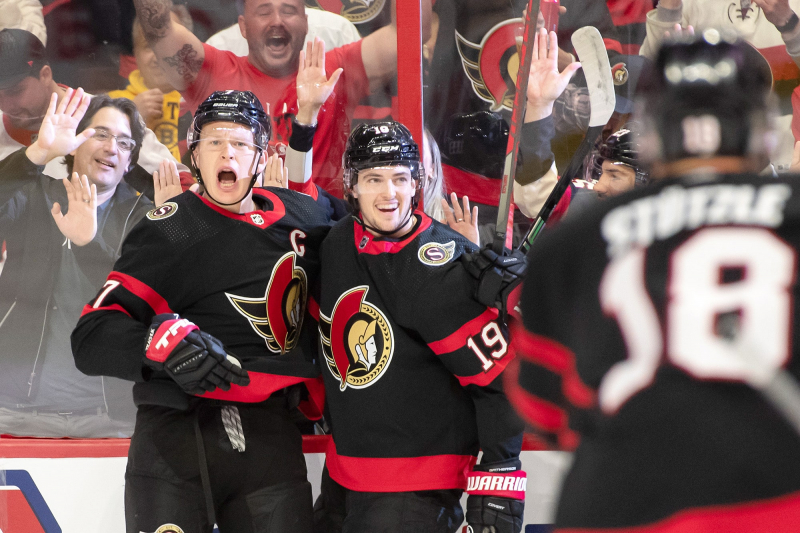 OTTAWA | The Ottawa Senators can no longer talk about development or reconstruction. With the summer acquisitions, the word victory came back into the daily discussions of the team and in the population.

It's important for young players who are about to reach their peak, but also for the future of the franchise on Ottawa soil.

The Ottawa market is fragile. We can not emphasize this enough. Before the outbursts of general manager Pierre Dorion, the Senators had been embroiled in rumors last March. We had mentioned the possibility that they would play five games at the Videotron Centre.

Everything had been denied, but there was no smoke without fire. In Ottawa, this episode was quickly forgotten.

Tuesday, the Senators' home opener was a kind of weather balloon. The organization announced a full house. However, there were several empty benches behind the two teams. Too bad!

Like the Alouettes and CF Montreal, the Senators are doomed to win and put on a good show. Their long-term survival depends on it.

Speaking of the future, the construction of a new amphitheater in downtown Ottawa is crucial. The Senators and their partners have taken a step in the right direction in recent months. We are talking about LeBreton Flats.

After a first attempt sabotaged by the late owner Eugene Melnyk, we will have to see if the second can lead to anything concrete. A file to follow.

A culture to implement

Pierre Dorion has done a colossal job to ensure that we have a solid core for the next few years. He added some good veterans to surround his young players in difficult times.

The Senators of the 2022-2023 season will need time to find their stride. It's inevitable. Claude Giroux and Alex DeBrincat must adapt to Josh Norris. The chemistry will develop. It just takes them a little time.

It's the same for youngsters like Brady Tkachuk, Tim Stützle and company. They must now manage the expectations of NHL fans and observers.

Building a winning culture doesn't happen overnight. It takes the right ingredients to make the cake rise. Dorion, the Senators cook, is convinced he has the right recipe.

The Senators have work to do. They still have some reflexes from the past. We saw it on Tuesday against the Bruins. On two occasions they were in full control but let the visitors back into the game. It's part of the learning process.

The Senators have announced their roster for the 2022-2023 season. Thomas Chabot, Brady Tkachuk and Claude Giroux were the most cheered players by the Canadian Tire Center crowd.

The presentation of the players was preceded by a video which lacked a bit of emotion and history. We haven't seen a picture or a thought of the late owner Eugene Melnyk.

If the Canadiens got the crowd going with Carey Price and his cowboy hat, the Senators did the same with Daniel Alfredsson and his curls.

The ex-number 11 appeared on the giant screen. He was sitting at his old locker in the locker room. The announcer let the crowd run the show. As he walked to the center of the rink, the fans gave him a warm welcome.

Sometimes you don't need a big show to get the job done. Good music, a legend, a sold-out crowd and it's settled.

Derick Brassard hopes he can play a game in the next week.

Derick Brassard is happy to have been able to land a contract with the Senators after his professional tryout. However, he still hasn't played a game since the start of the regular season.

His last appearance in uniform dates back to the preseason game between the Senators and the Canadiens presented in Moncton on October 8. Since that evening, he has had to content himself with training and sessions at the gym.

“ I have to accept the role they gave me, underlined Derick Brassard. I have to make sure I'm ready when they give me the opportunity to play.

“It's not an easy situation, but you have to adjust. You must always be in good physical condition. Then, during training, you don't always have the chance to participate in drills like regular players. »

Tuesday, before the meeting between the Boston Bruins and the Senators, Brassard took to the ice with his teammates. However, he was often limited to a spectator role during the exercises.

Good energy in the bedroom

He remains positive even if he hasn't had the chance to wear his number 61 again yet.

“When you come in or out of training often, it's important to be able to keep a good energy in the room,” added Brassard. I just have to bring my experience and my passion. We'll see what will happen.

With a streak of five games at home, Brassard should logically play his first meeting in the coming days.

During of the last five years, Brassard has played games for seven different teams. A great traveler by force of circumstance.

He has changed cities so often that he could be the spokesperson for a moving company. It's the reality of a veteran who can be a Swiss army knife for a team that aspires to high honors.

“ That's what happens when you sign contracts with a year. You have to rent an apartment before changing places again, explained Brassard. In times like these, it's hard to have a sense of belonging.

“It's starting to get heavy mentally. “

On his last day off, he went to his house in Montreal to see his girlfriend. It did him the greatest good.

He has just found an apartment in the Westboro district, to which he will be moving in the next few days. His girlfriend will join him afterwards.

Even if he is going through a difficult situation, passion still burns inside Brassard. An aspect that does not deceive in a hockey player.