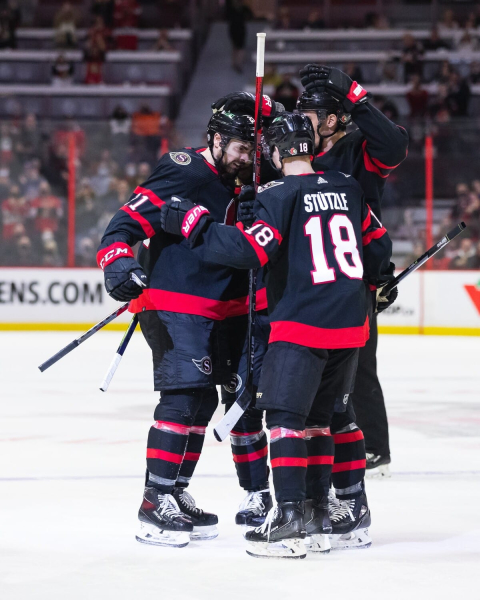 The Ottawa Senators snapped the Buffalo Sabers' six-game winning streak with a 3-1 win at the Canadian Tire Center on Sunday.

It was Jacob Lucchini who gave his team the victory by shaking the ropes for the first time in the National Hockey League in his fourth career game. The 27-year-old forward was forgotten to the left of the net on the power play and fired a one-timer shot that didn't give opposing goaltender Craig Anderson time to react.

The young German star Tim Stützle had opened the mark. He recovered a loose puck in the slot and hit the target with a good shot, after less than a minute elapsed in the game. Number 18 of the “Sens” got a second goal in an empty net.

Anton Forsberg gave his team a chance to get the victory by stopping 33 of 34 shots aimed at him. Zemgus Girgensons is the only one who managed to outsmart him.

The Sabers have suffered a rare loss in recent weeks. They are 7-3 in the last 10 games.

A first for Vlasic

In Chicago, Quebecer Marc-Édouard Vlasic scored his first goal of the season in a convincing 5-2 San Jose Sharks win over the Blackhawks.

The “Hawks” had a great opportunity to find the way to victory against the Californian team, which also occupies the shallows of the Bettman circuit. Like their game the day before, a 4-1 loss to the Columbus Blue Jackets, Luke Richardson's men instead suffered defeat again against an unthreatening formation.

The hosts, however, led by two goals at halftime. Patrick Kane and Sam Lafferty threaded the needle in the middle of the second period.

After a reply from Jonah Gadjovich, Vlasic brought the two teams back to square one by redirecting from the skate a throw-in from Matt Benning. The Montrealer, who was also playing his 1200th career game, had not hit the target since March 26, 2022.

Spectacular Swedish defenseman Erik Karlsson notched his 39th and 40th assists of the season in victory.

The Kraken broke a four-game losing streak with a victory by a score of 4 to 1 over the New York Islanders at the Climate Pledge Arena.

After a first period where each team registered for the score, the local team found their cruising speed and hit the target at three repeated without reply. Eeli Tolvanen, Oliver Bjorkstrand and Brandon Tanev managed to demystify Ilya Sorokin in the last 40 minutes of play.

The Islanders goaltender stopped 31 pucks in 34 attempts. His vis-à-vis Martin Jones obtained a 14th victory by giving up only once on 19 shots.

Adam Larsson gave his team the lead midway through the first period. Mathew Barzal was the only scorer for the “Isles”.