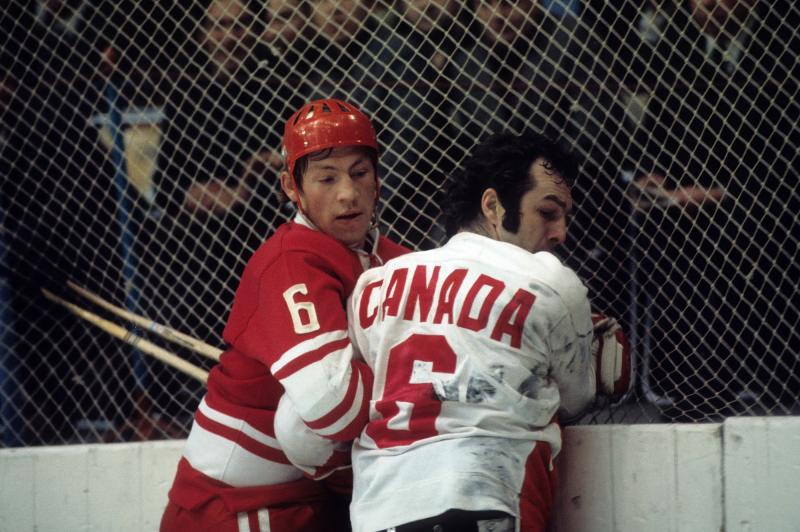 During this historic month of September 1972, then described as the “month of the century” in these pages, rare are the days that were not marked by an incident that went unnoticed or that did not did not make the big headlines at the time.

Like the unrest at Maple Leaf Gardens in Toronto, 48 hours after the humiliating 7-3 loss conceded at the Montreal Forum in the first game of the series.

Since the exercise is optional, Frank Mahovlich decides not to put on his skates. He walks nervously around the rink. We perceive that there is
perhaps a little too much activity for his taste a few hours before the second game.

Then, Mahovlich explodes when he sees the Leader of the Opposition, Robert Stanfield, putting on a Canada team jersey and going to the ice to be photographed with a few players.

“Que se does it happen here? exclaims Mahovlich. We don't play for politicians; we face the Red Army! »

The day ended well. 4-1 victory for the Canadians.

Have they just turned the tide?

The one considered by many to be the best player of all time is aware that the condition of his knees will prevent him from taking part in the series, but unlike those who have deserted the team due to their lack of use ( Vic Hadfield, Richard Martin, Jocelyn Guèvremont and Gilbert Perreault), Orr remains on site. Before the training of his people, he even jumps on the ice on a few occasions, just to worry the opponent or to motivate his people? Both, maybe…

Like the concern caused by Serge Savard's ankle injury in Game 3 of the series in Winnipeg.

Game 4 is off to a bad start in Vancouver.

Harry Sinden announces to reporters that Serge Savard has suffered a crack in his ankle bone. “For him, the streak is over,” said Canada's head coach.

Heavy loss because in the two previous games, in Toronto and Winnipeg, Savard had been Canada's best defender.

The news especially worried Yvan Cournoyer who can't help thinking about the position where the Canadiens find themselves heading into the season.

“Can we afford to start the season without JC (Tremblay), Terry Harper and Savard? asks Cournoyer.

Fortunately for Team Canada, the injury is not serious. Savard misses the fifth game (the first in Moscow), but he is faithful to the position for the last three clashes. He even concludes the series of eight games with four wins, no losses and a draw. He is the only member of the team who has not experienced defeat.

Like the bad mood of the Canadian players' wives upon their arrival in Moscow.

The Soviets are obviously doing nothing to make their stay pleasant.

They find it hard to accept, for example, having to have their meal in a corner of the hotel dining room, and the players in another corner.

They also have a hard time understanding that 'they are invited to go to the famous Moscow circus in the morning… while the players go there in the evening.

“Yes, we can share the same room as our wife , remarks Stan Mikita. No restrictions on this subject… fortunately! »

Like the fear for 161 Canadian tourists staying at the Hotel Ukraine of not being able to attend the sixth match, for lack of tickets.

They paid for these tickets and do not accept no explanation. In the hotel lobby, a chorus of protests shocked the eyes and ears of disciplined Muscovites.

Thanks to the intervention of the authorities of the Canadian Embassy in Moscow, everything is back to normal just two hours before the start of the match, and all these beautiful people make their way to the Palais des sports.

A look at the streets of Moscow in September 1972.

As the curiosity of the journalists and photographers of the newspaper Izvestia when the late photographer Denis Brodeur goes there to develop his films.

Brodeur is bombarded with questions: the cameras belong to you- Are they or are they the property of your newspaper? How much do you earn for each photo posted? What brand of car do you drive? How much does a Volkswagen cost in your country?

“At certain answers transmitted by an interpreter, says Brodeur, I could see the Moscow photographers frown and nod their heads…”

Like the ugly trick that Serge Savard plays to John Ferguson as the Canadian team returns to Dorval airport.

As it should be, Prime Minister Pierre Elliott Trudeau has a ringside seat to welcome the Canadian team.

He leaves with a golden souvenir: a stick autographed by all Team Canada members.

The catch is that this stick is the most cherished souvenir John Ferguson brings home. A joker by nature, Savard snatches the stick from Ferguson's hands and gives it to Mr. Trudeau.

“Mr. Prime Minister, here is a stick autographed by all the players that John Ferguson has brought for you.. .,” Savard told him.

Half a century later (and at 80 years old!), memory can sometimes fail, but how can we forget everything that September 1972 made us live!

The occasion: the first training session on Canadian soil for the Soviet Union national team.

It is first of all the look of one of the coaches of these strange visitors, the plump Boris Kulagin, which captures the attention. How can this guy manage to make his players understand the importance of exemplary physical condition?

Then, it is the entry on the scene of these twenty superb athletes who obey each whistle as if it were an order from the commander of the army. And my God, they're badly shod in them old faded leather skates; that their sticks give the impression of serving for a third year, and above all, that their goalkeepers look more like clumsy athletes…

The occasion: the first match of the series of eight between the national team of the USSR and the professionals of the National Hockey League.

New skates…latest fashion sticks…breathtaking skating strokes…and above all, what a dizzying style of play! “We came to learn,” they claimed hours before serving our hockey that we've always idolized, an epoch-making lesson.

And above all, Tretiak. Vladislav by his first name. The real Vladislav Tretiak is asked to stand up and suddenly the Hendersons, Mahovlichs, Espositos, Savards, Cournoyers, Gilberts and others meet him. He has not finished furnishing their nightmares. It looks nothing like the one everyone was thwarting with their eyes closed two days earlier.

The place: the Luzhniki Sports Palace in Moscow, September 22, 1972.

The occasion: start of the second leg of the eight-game series.

< p>That things are happening in this place where some 3,000 Canadian tourists really contrast with the austere-looking regulars of the place and where ice cream is only equaled in popularity by the hot dogs of the former Montreal Forum…

A Soviet hockey fan raves about the prowess of his favorites at the Palais des sports in Moscow.

The Canadian troupe, already deeply hurt in their pride by failing to do better than a record of a win, two losses and a draw in front of their own, is struggling to get used to the lifestyle behind the curtain of iron. The third loss in five games was not long in adding to this less than stellar record.

Then, it was the explosion of Canadian hockey.

3 to 2 victory in Game 6. Decisive goal by Paul Henderson.

Win 4 to 3 in the 7th game. Decisive goal by Paul Henderson.

Eighth and final game. Twenty minutes to go and the Soviets 5-3 priority.

This is when we really recognize “our” hockey. With less finesse, but with what ardor, with what improvisation, with what instinct of the killer, the troupe of the Harry Sinden-John Ferguson duo takes up the challenge. With 34 seconds to go, it's euphoria. Victory 6 to 5.

Who else but Paul Henderson, who in the space of a few days has become a kind of “Rocket” Richard. More so, national glory.

The Series of the Century is now 50 years old. As if it were yesterday… or almost.

For the privileged, including the author of these lines, who lived it from Montreal to Moscow, via Toronto, Winnipeg and Vancouver, it will remain forever etched in our memories.

Accreditation of journalist Gilles Terroux for the match on September 22 in Moscow.

That Canada narrowly won back then matters little now. It is his legacy that we must especially rejoice in. From the slap of September 2, 1972 (7-3 in favor of the Soviets), North American hockey learned many lessons. He surely learned much more than the Soviets claimed to come to do.

In 1987, it was good to reconnect with most of the craftsmen of this memorable series on the occasion of a reunion tour after 15 years.

Three friendlies had brought them together in Montreal, Hamilton and Ottawa.

Before the match in Montreal, the great Tretiak had made a detour to the premises of the Journal de Montréal. He left with a copy of the book Le match du siècle published in 1972 by the author of these lines and the late photographer Denis Brodeur.

While in Montreal in 1987, 15 Years after the famous Series of the Century, Journal de Montréal journalist Gilles Terroux gave a copy of his book The Game of the Century to Soviet star goalie Vladislav Tretiak.

Tretiak… Dryden… Tony Esposito… Savard… Lutchenko… Henderson… Mikhailov… Mahovlich… Cournoyer… Petrov.. Gilbert… Yakushev… and the others: the reflexes weren't so sure anymore; the extra pounds had slowed down the skating; cookie-cutter climbs were becoming rarer.

Who would have dared to complain?

Half a century later, these legends will remain forever . They will have marked the imagination!