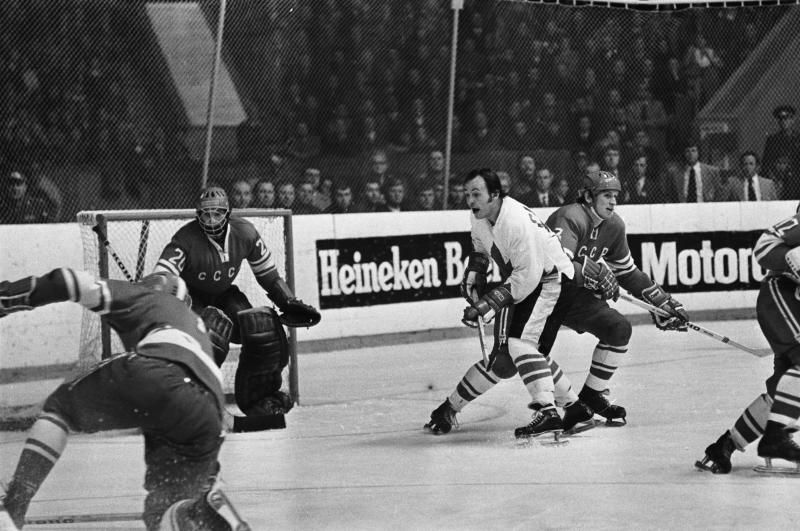 That's the magic of a ledger. I was in Florence, Oregon. After a good day of motorcycling which had brought us to the shore of the Pacific Ocean. I started to read the last pages of the book undertaken in San Francisco and I started to travel…

But not on the asphalt. In time. The chapter is called Extension and closes the pages of The Series of the Century, as I lived it, the book by Ken Dryden.

I completely took off. For at least five minutes in my room at the Best Western, I saw myself again on September 28, 1972, Thursday afternoon in Saint-David de Falardeau. I was a young Latin and Greek teacher and journalist at Progrès-Dimanche.

I remember the red carpet in the living room of the humble bungalow built on Martel Boulevard leading to Falardeau. I felt a little guilty for being too “flu” to go and give my class on the use of the supine to form the passive of verbs. But I couldn't miss this game. Moreover, math, French or history teachers had caught the same flu.

I remember the dark fan desperation that gripped me when the Soviets retreated to the locker room with a 5-3 lead after two periods. I swear by thinking that Tony Esposito would have been better than Dryden.

Then came the goals of Phil Esposito and Yvan Cournoyer. And above all, THE goal of Paul Henderson. After ? I ended up in Florence, Oregon. In a hotel room…

THE SAME REACTION ACROSS CANADA

“I was 190 feet from Vladislav Tretiak's goal. Then, somehow, I found myself in the group that was celebrating. It was after that I realized what had happened across Canada. I put some very meaningful pictures in my book. It's amazing to see these construction workers soaring in the air and finding a way to follow the game. Or those hundreds of Simpson's employees in Toronto who all left their jobs to live the game. Besides, there were no customers, they had their eyes glued to a TV or their ears glued to the radio.

Vladislav Tretiak all smiles in his office at the Russian Hockey Federation in Moscow.

“Canada had 22 million people at the time and that day, depending on the time zone, there were 16 million gathered for this eighth game,” says Dryden with a smile. You have to be at least 55 years old to have a memory of this meeting which revolutionized hockey all over the planet. But as the former great goalkeeper of the Canadian explains, the Series of the Century was told to children by fathers and grandfathers from generation to generation. And by mothers and grandmothers too. Those who have followed the series have never forgotten.

THE BOOK THAT MUST NOT BE WRITTEN

This marvelous book should not have been written. In fact, Ken Dryden had repeatedly refused to embark on writing a book about the Series of the Century. First, he told himself that his clientele had aged. He didn't want to go through hundreds of interviews and searching for documents to end up with a 175,000-word book like he did with Scotty Bowman's: “I did it and I knew what it meant. say. And then, this series, I had lived it. My emotions were mine. I couldn't see myself trying to share them in spite of myself,” he says.

Then, on December 20, 2020, at the end of the first year of the pandemic, when it was frowned upon to cross borders and family gatherings were almost prohibited or very complicated, Dryden found himself with his thoughts. Impossible to find the children. And time to savor the memories, the emotions, to order them: “It was during these few weeks usually devoted to family activities that I took the step. I told myself that I would write a book, but it would be the book of my thoughts, my emotions, my feelings that I would write. It would be the Series, but like me, I had lived it. Perceived. Path.

“I dove back into the memories that came back to me and wrote a first draft which I sent to the editor. I was filled with doubts. I asked him to take a look. He got back to me quickly saying it was exciting. Along the way, on three occasions, I added memories that came to the surface and that was it. This is the book you read. It's me. It's intimate. It’s personal,” says Dryden.

And I should point out that Serge Rivest’s translation is extraordinary. It is never intrusive, never heavy. The book would have been written in French, it would not have been more pleasant to read.

Ken Dryden is still emotional talking about his former opponents. He and his teammates only needed a first half to realize they were in a war: “They were strong, they were quick, they were solid, they were skilled. They were great adversaries. And everyone who has been involved in this series shares one thing. Russians or Canadians. They know deep down that the excellence and greatness of the opponents has allowed them to discover a greatness in themselves that cannot be achieved without a great opponent. We can play dozens of games in a lifetime, but we remember those that pitted us against great opponents. We forget this game against Minnesota, but we remember the Bruins ten or twenty years later.

“Whenever I saw these players from the Soviet team, I always felt this intimate connection. It's like two people who don't speak the same language, but who have shared something important. If these people pass each other on a sidewalk, all it takes is a look, an expression for the two to know what the other is feeling. When I saw Vladislav Tretiak again, we felt it. He knows me, I know him, we've known each other for 40 or 50 years, ”says Dryden in long answers that I summarize as best as possible.

Soviet goalkeeper Vladislav Tretiak had attended the withdrawal of the bib 29 worn by Ken Dryden at the end of January 2007.

And I can safely say that in his office as president of the Russian Hockey Federation in Moscow, Vladislav Tretiak thinks the same thing when he looks back on his memories.

Modern hockey was born in 1972

So you were too young to experience the Series of the Century. But you love hockey, this modern sport that allows players to twirl, launch cross attacks, where the numerical advantages are imaginative and varied.

This modern sport, it originated in 1972. Ken Dryden agrees with this statement: “We knew a way to play. We knew we were the best with this way. Suddenly, we were confronted with another way of playing. And they were as good as us playing differently. It was a shock,” said Dryden

In the years that followed, great coaches like Scotty Bowman and Al Arbor traveled to Finland or even Moscow to attend hockey seminars. Everything has evolved rapidly on both sides of the planet.

“The result is fabulous,” said Dryden. We have Wayne Gretzky who excelled in an almost European style and Alex Ovechkin who skates and hits like a pure North American player. Both styles have shaped modern hockey,” added Dryden.

And even the goaltenders had to adapt. The butterfly replaced the standing Gump Worsley style to prevent cross passes…

So it was September 2. A Saturday. Ken Dryden recalls that the Canadian team had arrived from Toronto the day before: “I'm not sure, but Harry Sinden must have told me on Friday that I would be the goaltender for the first game.

” I woke up early. It's always exciting to play a first game of the season, but this morning it was stronger than usual. I wasn't sure why, but all the guys were feeling more nervous than usual. However, we were convinced that we were the best. We had had a good training camp and a good exercise the day before. Despite everything, during this day, I felt that it was nothing ordinary what we were going to live. We felt something different.

“We left the Bonaventure Hotel around a quarter to six and settled in the locker room. The excitement kept growing as we approached. Harry Sinden may have made a speech, he may have said a few words, but I heard nothing. I was in my world. In my head. After the warm-up, before the ceremonial face-off by the Prime Minister, Phil Esposito swore that he was going to win this damn face-off. Already, the competition was set up.

“Afterwards, we left the rink after the first period when it was 2 to 2, we knew we were engaged in a war. It was not a 2 on 2 like it often is. Where we are still in control of the match. We knew they were as good as us…