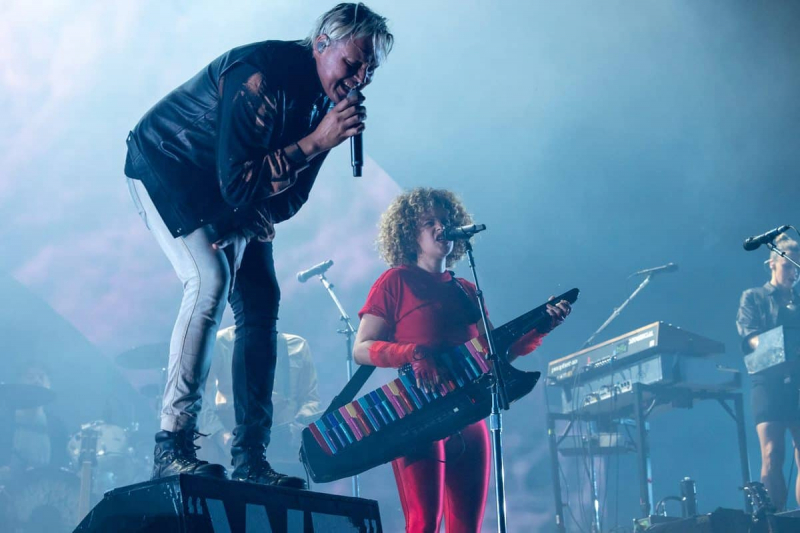 Mixed reviews, upset fans, venues far from full, Arcade Fire's new world tour obviously didn't get off to the expected start. Targeted this summer by allegations of sexual misconduct, the singer Win Butler will find in a month, on December 3, the Quebec public in a Bell Center which has thousands of tickets still available. A look back at the last chaotic weeks of the group that was once the pride of Montreal.

On August 27, three days before the start of Arcade Fire's world tour in Europe, the renowned American media Pitchfork launched a bombshell: the singer of the group Win Butler allegedly sexually misconducted four people. In the testimonies collected, several events allegedly took place in Montreal. Win Butler responds to these allegations by saying that they were all consensual reports. His wife Régine Chassagne supports him. The tour continues as planned.

During the first two concerts of the tour, in Dublin, Ireland, some spectators met by local media mentioned not being aware of the recent controversy. Others admit to having gone to the show a little backwards, for lack of being able to get their ticket reimbursed. Videos of these concerts show a very enthusiastic crowd, as in the good years of the group. In the media, on the other hand, we can read several lukewarm, even very negative reviews. The Financial Times gave it a two out of five star rating, writing that the “once great” group is now suffering from “a slow puncture”.

Feist and Beck leave the boat

In Europe, after only two performances as the opening act for Arcade Fire, Canadian singer Feist announces that she is retiring from the tour. In a long post on social media, she mentions in particular that “staying on the world tour means that I am defending or ignoring the harm caused by Win Butler, and leaving would mean that I am judge and jury. After a radio silence of several weeks, Beck announced in turn that he would not participate in the North American portion of the tour. The Haitian band Boukman Eksperyans is called to the rescue and takes care of the first parts for the rest of the calendar.

While many expected Arcade Fire to cancel their tour this summer, the band chose to press on, come hell or high water. For the founder of Pop Montreal, Dan Seligman, who worked closely with the group, this decision is not surprising because such a tour costs “millions and millions of dollars”. The musicians could lose money in this story, however, because the majority of their concerts in Europe were not sold out. Even worse: many spectators try to resell their tickets. In Toronto, there were more than 1,000 tickets available for resale on the Ticketmaster site for the December 1 show. In Montreal, people want to resell nearly 800 tickets for the December 3 concert. The task will be difficult for them, because there are still at least 2000 tickets still available at the Bell Centre.

What future for Arcade Fire?

In Europe, in the first echoes of the start of the group's tour in August, there was talk of musicians playing disembodied and having no interaction with each other. Some pessimistic observers even went so far as to say that the band could very well break up after this tour. For Dan Seligman, if the members of Arcade Fire ever want to release another album and go on tour again, they will have to wait a very long time. “Because it will be something stressful for them. As for the city of Montreal, which was so proud of Win Butler's band, we can almost speak of a heartbreak. “The group was part of the mythology of the city, just like Leonard Cohen and Celine Dion, says Dan Seligman. What happened hurts collectively. »