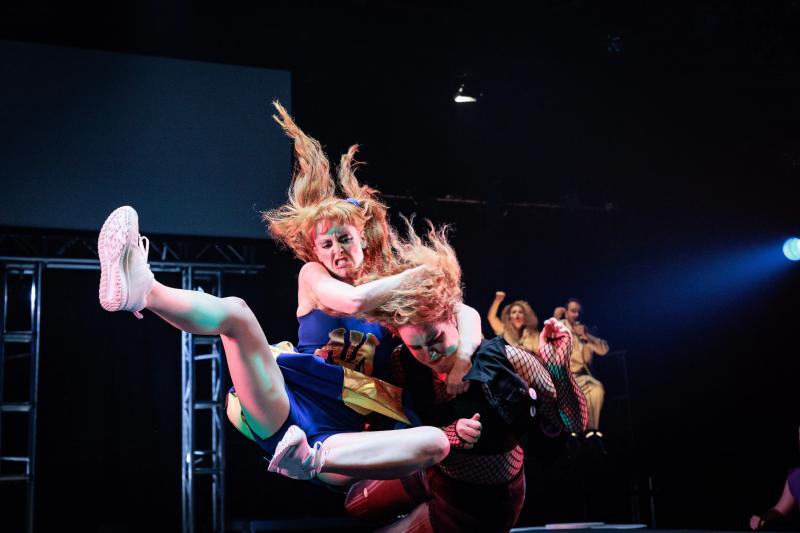 Inside Montreal, journalist Louis-Philippe Messier travels mostly on the run, his office in his backpack, on the lookout for fascinating subjects and people. He speaks to everyone and spans all walks of life in this urban chronicle.

It is often said that wrestlers must know how to play. Some even take acting classes.

Well, the Royalmania theater wrestling festival shows us that it can also be the opposite.

Young trained actors can learn wrestling passes and holds… and they then give the impression of having done this all their life!

“I had the idea of ​​adapting the story of the Trojan War [to create Agamemnon in the ring] in professional wrestling format after an experience that opened my eyes to the similarities between Greek tragedy and televised wrestling”, explains Hilaire St-Laurent, the author of the play which he rewrote in alexandrines- joual, punctuated by rock opera numbers for the event.

To finance an internship in France, his class from the National Theater School of Canada had the idea of ​​holding a wrestling gala …which sold a lot of tickets!

It was then that Hilaire St-Laurent had his epiphany.

“In tragedy there is a chorus, in wrestling there are commentators, and in both cases the characters deliver monologues addressing the crowd. “

The ancient performances would not have run the masses if they had been performed in a clean and sober way.

“I think the dramatic performances of the time were carnivalesque and had something rock show with dancing and singing… a bit like we do there! »

The character of Dick, the wrestling version of Shakespeare's King Richard III, treacherously attacks his brother from behind to climb to the throne.

The director of another play I attended, Dick the Turd (comic popularization of Richard III, Shakespeare's drama), Elisabeth Coulon-Lafleur, also speaks of a return to a vital energy often evacuated from the normal theater.

“Often, in the theatre, you are forced to remain very calm and perfectly silent, which can sometimes be a bit boring, but with wrestling-theatre, it's liberation, the audience is jubilant, howls, laughs, shouts… . and our actors have the satisfaction of answering them! » she says.

« The partition which separates the actors from the spectators is abolished. »

My theater experience is not endless, but I have never seen such a ruckus in plays!

It's a marathon of intensity.

These two-hour fights are killing the actors, all covered in sweat, but they are doing very well!

Young women seated behind me during Agamemnon in the ring nearly burst my eardrums.

Have I ever screamed myself? Obviously!

The desire to respect the plot and the elements of the Homeric story in this “struggle” version prompted Hilaire St-Laurent to include, in particular, the sacrifice of Iphigenia and the blow of the Trojan horse which, jokingly, becomes “Troy-Rivière”.

His Agamemnon borrows expressions from René Lévesque. (The trap into which the king fell on his return from war refers to the “Night of the Long Knives” of November 1981…)

“Richard III by Shakespeare, he is a villainous character like we like to hate wrestling… and that's what we did with it,” says Élisabeth Coulon-Lafleur.

►The Royalmania wrestling-theatre festival continues at the Aux Stables until September 24.