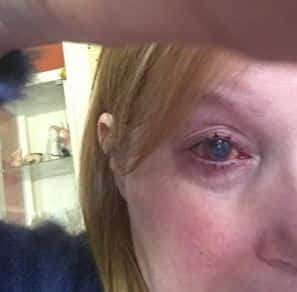 A woman had to have her left eye removed after catching a parasitic infection while showering while wearing her contact lenses.

Marie Mason, 54, from the UK, believes she contracted a parasite while showering. At the time, she wore contact lenses that last 30 days. she told BBC News.

Ms Mason first noticed something was wrong in 2015.

“I started to feel like there was something in my eye, like a grain of sand or gravel that when you rub it should normally go away, but it didn't,” explains she said.

An optician then advised the lady to go to the hospital. Doctors diagnosed him with Acanthamoeba keratitis.

What is Acanthamoeba keratitis?

Acanthamoeba keratitis is an infection rare caused by a microscopic organism that infects the outer layer of the eye, the cornea.

It occurs more frequently in people wearing contact lenses. However, anyone can catch it. Showering with contact lenses or cleaning them with tap water increases the risk of contracting keratitis.

If the infection is not treated, it can cause pain and blindness.

“Very few of them lose their eyes, but about half will lose a significant part of their vision,” says John Dart, honorary professor at the UCL Institute of Ophthalmology in the UK, in an interview with BBC.

Unfortunately, such was the case with Marie Mason.

Five years later, after several treatments with medication, eye drops and three corneal transplants, Marie Mason had to make a difficult decision: she had no choice but to have her left eye removed.

She is now wearing a fake replacement since the surgery two years ago .