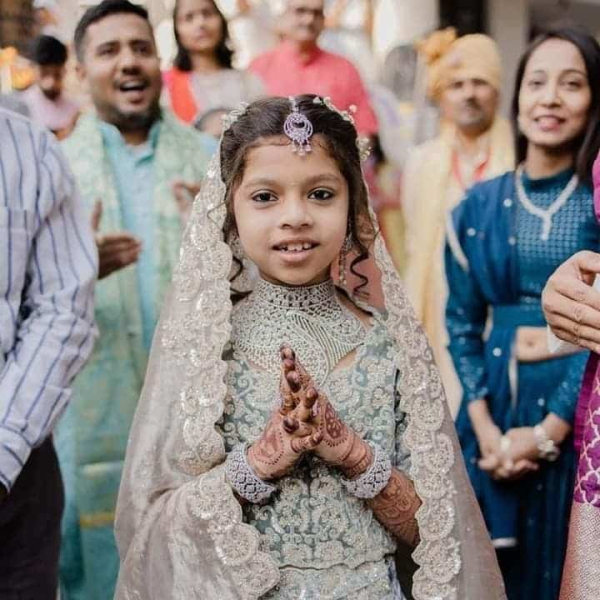 Dedicating your life to your inner faith, at the expense of a multi-million dollar fortune in diamonds. This is the unusual choice made by Devanshi Sanghvi, an eight-year-old girl from India.

Until this week, she was the heir to the jewelry business Sanghvi and Sons in the city of Surat (Gujarat, west), locally known as the “Diamond City” for its importance in the global gemstone trade.

But Devanshi Sanghvi decided to give up the pleasures of the world – and her fortune – to become a nun in a strict religious order of the Jain faith, in a four-day ceremony.

On Wednesday, she arrived at a temple to exchange her elaborate clothes for a simple white cotton outfit, after having her head shaved.

Her parents said that she was eager to become a nun, according to local media.

His family are members of the Jain faith, a religion founded in India in the 6th century BCE, which preaches non-violence, asceticism, strict vegetarianism and love for all creatures.

Devanshi Sanghvi was known to members of the Jain community in Surat for her piety, according to a witness to the ceremony, interviewed by AFP on condition of anonymity.

“Devanshi never watched the television, been to the cinema or to shopping malls and restaurants,” he pointed out.

Jainism has more than four million followers in India, many of whom come from wealthy trading communities.

This religion is criticized for some of its ritual practices, in particular for a tradition of extreme fasting. A 13-year-old girl died in 2016 in Hyderabad (central) during a two-month fast as penance, during which she was only allowed to drink hot water twice a day.

Her death sparked outrage and her family was accused of forcing her to fast. His parents have been charged by the police with manslaughter.