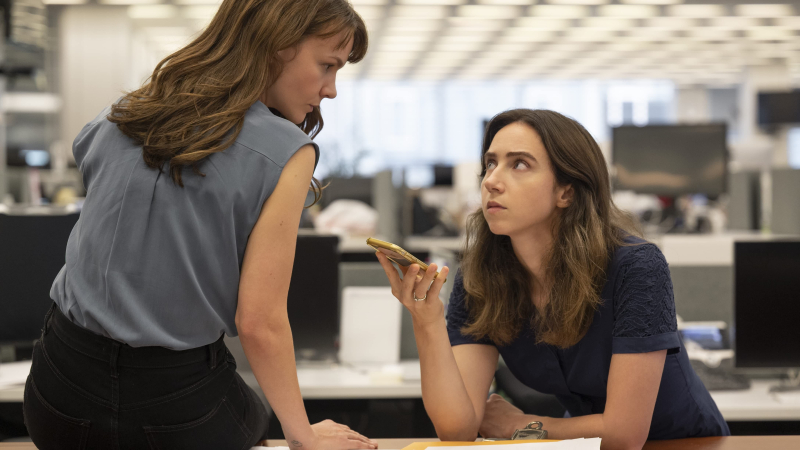 In the first months of 2017, in the middle of the American election campaign, Megan Twohey (Carey Mulligan), journalist for the “New York Times” publishes a series of articles shedding light on the sexual misconduct of Donald Trump. A few months later, she joins her colleague Jodi Kantor (Zoe Kazan), then investigating Harvey Weinstein.

At the beginning, there is a voice on the phone, that of Rose McGowan, telling Jodi Kantor that she was raped and silenced by Harvey Weinstein. She leads the journalist to Ashley Judd – moving, because the actress plays her own role in it –, then to others as the research progresses. Zelda Perkins (Samantha Morton), Laura Madden (Jennifer Ehle), Rowena Chiu (Angela Yeoh) are all former employees of Miramax, the company founded by the Weinstein brothers. They speak, but do not want to be quoted. Jodi Cantor and Megan Twohey persist. Conversations with Gwyneth Paltrow—what a smart decision by filmmaker Maria Schrader to never cast the roles of actresses known to others—are met with a wall of silence, shame, and fear.

There is nothing worse than silencing a victim, nothing worse than preventing freedom of speech, the freedom to be able to control one's life and destiny. The workings of Harvey Weinstein — and through the producer, of an entire industry — are starkly dissected, sentence after sentence, camera shot after camera shot. We hear horrors, all true. How a woman's consent is unclear, how a man can make or break a woman's career, how a woman is not allowed to read the agreement she just signed , how the shame of women turns into pain, then into a desire to end one's life.

We see lawyers, accountants… so many cogs in a system that has been run a quarter of a turn for decades of fondling, proposals, sexual assaults, financial settlements. And Weinstein denies – he is only shown quickly from behind in the offices of the “New York Times” since it is not his story – intimidates, harasses journalists and the editorial team of the American daily. He will even hire a security company with muscular methods, responsible for scaring anyone who wants to get in his way.

Jodi Kantor and Megan Twohey gradually manage to convince a few women to testify . They persist and sign. Their article appeared on the front page of the daily on October 5, 2017. Five years later, Weinstein is again before the courts, in California this time, in order to continue to answer for his crimes.