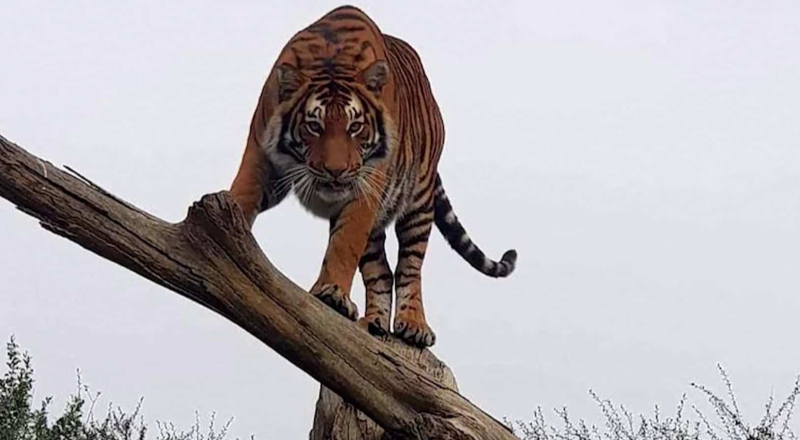 She was shot after killing again: Sheba, a tigress kept as a pet who escaped her owner and had been prowling for four days near Johannesburg, was 'killed' on Wednesday after another attack on a dog .

“We had no choice but to eliminate her” because “she killed a dog on a farm where six families live” and “the danger had become too great”, has Mandy Gresham, a local community representative who participated in the search, told AFP.

The eight-year-old Bengal tigress had already attacked a 39-year-old man in her path, who survived, and killed other dogs and a deer. She was sought by several dozen police officers, nature activists and neighbors aided by drones and helicopters.

The big cat managed to get out of its enclosure on Saturday, after an unknown cut the fence of a private property about thirty kilometers from Johannesburg, the economic capital located in the most populous province of the country.

In South Africa, it is illegal to own a lion as a pet, but tigers are allowed, much to the chagrin of animal welfare organizations who are calling for a new law.

La legislation prohibits the keeping of native species and the tiger, which is not endemic to South Africa, is considered an exotic animal.

In recent years , tiger farms have multiplied in the interior of the country, feeding the lucrative trade of sale to zoos. But livestock also feeds the black market in skins and bones, particularly popular in Asia for luxury products and in traditional medicine, denounce the NGOs.

“We ask the authorities to put an end to the breeding of tigers because if it were prohibited, all this would not happen”, underlined Elize Parker, of the NGO Four Paws, regretting the death of Sheba.

The South Africa is also known for allowing the controversial breeding of lions to satisfy wealthy trophy hunters.

The country has no official census of its tiger population, but according to the animal rights NGO Four Paws, almost 10% of the world's population (359 specimens) were exported from South Africa between 2011 and 2020.