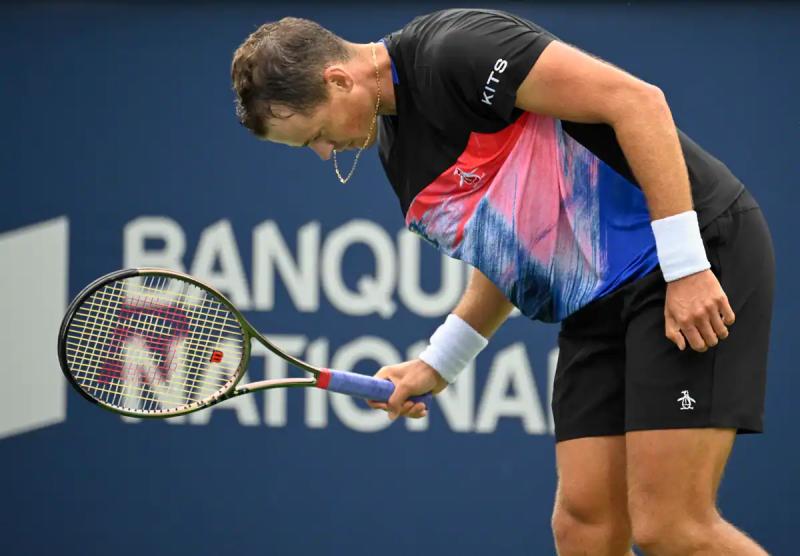 Canadian Vasek Pospisil was unable to extend his work week at the National Bank Open, losing in the first round of the doubles tournament along with his Italian partner Jannik Sinner, on Wednesday.< /strong>

Pospisil and Sinner suffered a heartbreaking defeat by the score of 4-6, 6-2 and 10-8 against the French Gaël Monfils and Benjamin Bonzi on a court number 9 offering a surprising atmosphere.

“Allez les Bleus!”, we could also hear, while the French were numerous to attend the meeting.

Several times during the exchanges, the Italian released amazing shots, bringing a wide smile to the face of the Canadian. Very close to the action, the crowd appreciated, multiplying the rounds of applause. The generous Monfils also animated the meeting, amusing the spectators by addressing them. He also multiplied the autographs at the end of the match.

Obviously, the main show took place at the same time on the center court between Félix Auger-Aliassime and the Japanese Yoshihito Nishioka.

Earlier in the day, Sinner had won his second-round match, in the singles event for which he is the seventh seed, against Frenchman Adrian Mannarino in straight sets 2-6, 6-4, 6-2. Pospisil, for his part, was eliminated from the start in singles action on Tuesday against American Tommy Paul.

In the case of Monfils, he also advanced to the third round after defeating the American Maxime Cressy in two sets of 7-6 (10) and 7-6 (6). The long tiebreaker in the first set offered some great moments to the crowd at Rogers Court, who warmly applauded Monfils after the 22 points between the two players.

Among the top seeds, to a lesser extent than the successive elimination of favorites Carlos Alcaraz and Daniil Medvedev, the defeat of fifth-seeded Russian Andrey Rublev added to the the carnage. He lost, in the evening, in two sets of 6-4 and 6-4 against the Briton Daniel Evans. The loss of the Bulgarian Grigor Dimitrov, 15th favorite, against the Australian Alex de Minaur, is also to be highlighted. The latter had also been the faller of Denis Shapovalov in the previous round. The table is now set for a rather unexpected Australian duel between Nick Kyrgios and de Minaur.

Argentinian Diego Schwartzman, 12th seed, suffered the elimination against the Spaniard Albert Ramos-Vinolas. As for the American Taylor Fritz, 10th seed, he was very hot, having to come back in the third set against his compatriot Frances Tiafoe to win 5-7, 6-1 and 6-4.