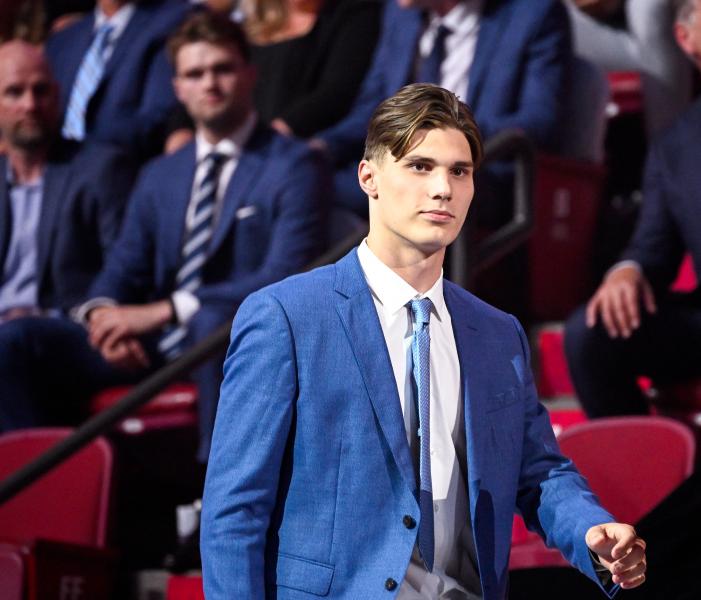 I really enjoyed the first round of the NHL draft on Thursday at the Bell Centre. A round full of surprises, the main one being the selection by the Canadian of Slovak Juraj Slafkovsky. I'll have to get used to pronouncing his name!

< p>That's the impression I got when I saw him on the ice at the Olympics. There is also Jaromir Jagr who says that the game of the Slovak resembles his, at the same age. Phew! This statement does not come from just anyone…

The Canadiens finished 32nd overall last season. It's obvious that Slafkovsky will be on the ice for the opener in October. Stop it, the “we'll see at training camp”.

The Canadiens are the worst team in the NHL. If the very first choice does not play for the big club from the start, there is a problem somewhere… Especially since he seems to have all the qualities required. A big winger, good skater with an excellent throw.

I will wait before getting into the comparison game, however. We did it too much with Jesperi Kotkaniemi. I heard so many people say that he was going to be an extraordinary player, that you had to be patient.

I'm sorry, but it's not exceptional. I haven't waited for three years. And to think that the Canadian could have selected Brady Tkachuk, who would have been his concession player and maybe even his captain.

The CH did it big

However, I experienced a disappointment, that of seeing the Canadian choose only one Quebecer in this repechage: Miguël Tourigny, a 20-year-old defender who was selected in the last round.

It does something to me. Each new manager in Montreal says that with equal talent, the team will draft the Quebecer. But in the end, only one was called by the Canadian. And all Quebec players dream of wearing the colors of CH.

Head recruiters do not live in Quebec. They see fewer QMJHL games than, say, Martin Madden Jr. of the Ducks, who is the only head scout in the league from Quebec.

It is therefore no coincidence that he selected three Quebecers: he often spied on them. There is a relationship that is created between Madden Jr., the general managers and the coaches of the QMJHL teams.

Also, I feel bad for the two Canadiens scouts in Quebec, Serge Boisvert and Donald Audetta. I always have the impression that they are seated at the end of the table and, from experience, I know that the recruiters installed there, they are not much appreciated.

Since the repechage was taking place in Montreal, I would have liked us to put a little emphasis on Quebec talent. Not just on that, of course, but let's choose more.

I also know that some people think that when the team wins, the nationality of the players who compose it doesn't matter.

But there, the Canadian hasn't won for a long time.

IT'S NOT OVER FOR THE CANADIAN

I think Kent Hughes has not finished improving his team, especially with the departure of Alexander Romanov. The free agent market opens Wednesday. But, of course, the Canadiens are no doubt hoping to hear from Mr. Price, who is slow to give an official answer regarding his future.

We always have the impression that the direction the CH will take depends on whatever Carey Price decides.

These are teams that aspire to the Stanley Cup, and their best players, the Auston Matthews and Connor McDavid, arrive in their prime, as they say in the jargon.

Toronto released goalkeeper Petr Mrazek. Edmonton has parted ways with Zack Kassian. The general managers are trying to free up space on the payroll in order to find the player they need to win top honors.

Kings president Luc Robitaille hasn't forgotten where he comes from. He knows Manon Rhéaume or, at least, he has often heard of this pioneer of women's hockey.

Manon manages a hockey program in Detroit. And now, the former Quebec goaltender will act as the team's hockey operations and prospects advisor in Los Angeles.

I attended Dominique Ducharme's golf tournament this week and found him to be in good shape. It is obvious that Dominique has been in contact with several National League organizations.

I think he will take his time before choosing his next destination. He will want to make the right decision. But for me, it's obvious that we will see him again behind the bench of a team.