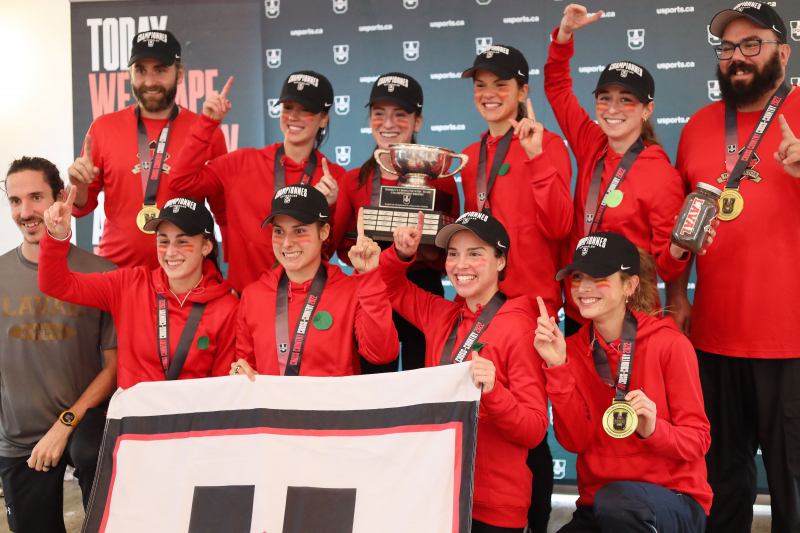 It was tight, terribly tight, but the Laval University Rouge et Or managed to retain the women's banner of the Canadian cross-country championship, played Saturday in Halifax, in difficult conditions where the rain and wind caused problems for the runners.

Widely favored among women, the Rouge et Or finally won by a small point in front of the UBC Thunderbirds , who won gold and bronze in the individual table.

“The girls gave a good performance, a performance as good as last year when we won in Quebec by placing five riders in the Top 15, but UBC was much better than I thought, summed up the head coach. Felix-Antoine Lapointe. They were very surprising and challenged us more than we thought. »

The result of the first five girls of each formation among the seven at the start was counted to establish the classification of the teams.

“It was played in the last kilometer, explained Lapointe. Our runners 4 and 5, Sara-Pier Paquet and Florence Caron, were involved in battles with girls 4 and 5 from UBC. Our girls finished in 14th and 15th place to beat their opponents who took 17th and 18th place. »

A great end to her career

On an individual level, defending champion Jessy Lacourse, in her last career outing, finished second between two UCB runners with a time of 28 min 31 s.

“Jessy would have liked to win, but winning the banner as a team and finishing second in the individual standings is a great end to his career,” said Lapointe. Both UBC girls were very strong and it was a challenge to win. »

“The game plan was to stay in the pack for the first part of the race and get the leaders in the second part,” continued Lapointe. Jessy followed the game plan to the letter, but she was unable to beat Glynis Sims [28 min 19 s]. »

Deprived of their leader Jean-Simon Desgagnés, injured in an ankle, the Rouge et Or was nevertheless able to finish in second place in the overall standings. Too strong for the field, the McMaster Marauders won the banner.

“I'm really happy with our podium,” said Lapointe. Victory was not accessible with the absence of Jean-Simon, but we were aiming for the podium. Even with Jean-Simon, we wouldn't have been able to heat up McMaster, who was betting on four fifth-year runners. It was their year. Lapointe praised the performance of Philippe Morneau-Cartier, who finished second with a time of 24:24, three seconds behind winner Max Turek.

“In only his second season , Philippe was impressive. This is motivating for the rest of the program. »