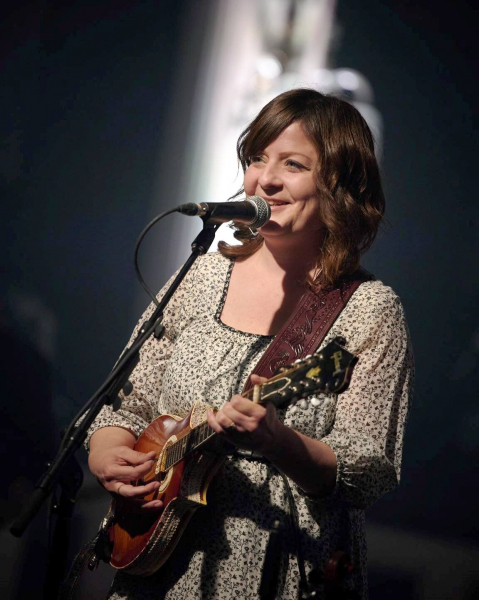 Used to tour with her fellow Cowboys Fringants, Marie-Annick Lépine is also pursuing a country folk solo project. The Diaryspoke with the multi-instrumentalist about her new show, which includes the participation of Catherine Durand and Mara Tremblay, and took the opportunity to hear from her husband, Karl Tremblay, who recently announced that he has cancer .

Among the musicians accompanying you on stage for this solo show, we find Catherine Durand and Mara Tremblay. How did they come to join you?

“I had gone to Catherine for her party. Mara was there too. Catherine participated in my three solo albums, for vocal harmonies, so for sure she was going to be part of the new show. Mara listened to my new songs and she told me that she would like to perform in my show! She wanted to relive the instrumental side in a show, not to be the one who has to speak with the crowd and on whom the show rests. She felt like going back to her first love.”

“Finally, we get along so well! Mara and I have a similar style of playing the violin. We can improvise as we want on a song and it's always nice, because we both listen to each other well. We have a lot of fun doing the show.”

“I find it wonderful to have three female multi-instrumentalists in the foreground. I am also accompanied by Dan Lacoste [guitar, banjo, and more], Pierre Fortin [drums] and Jean-Sébastien Chouinard [guitar, bass]. It's an all-star band, as they say!”

Was it planned from the start that you would open for the Cowboys in Europe with your solo project?

“No, last February, it was supposed to be Les Trois Accords! Because it was a postponed tour from March 2020. We had to go with them to Europe. But it was really complicated with COVID and travel. The guys decided not to come. After that, we thought that the ideal would be for me to do the first part. My musicians already play with the Cowboys, so it was easier.”

How do you envision your return to Montreal next Friday?

“I can’t wait because it’s a bit of a resumption of the Francos. This summer, when I was playing at the festival, we had terrible weather. After five songs, it was the deluge. We were being whipped by the rain. We couldn't finish the showand I was really disappointed. Claude [Larivée, manager of the Cowboys and president of the label La Tribu] came to see me and told me that we would resume with a room in Montreal in September. We are therefore making a comeback in Montreal and the show is free. I'm so happy to do it!”

“The schedule will change. With the situation we are going through for Karl [he is undergoing chemotherapy treatments for prostate cancer], we have decided to postpone some Cowboys shows this fall. Karl did the sorting himself. So it will leave me a little room if I have requests for solo shows. I already have seven or eight scheduled.”

How is Karl today?

“He is fine. He is not someone who makes things difficult for the people around him. He is a very strong man inside, mentally. It is not difficult to live with him in this situation. On the other hand, it is sure that it is difficult for him, for me and for the children. There were different stages. We knew it since January 2020. When people found out [in July last], it was very touching news, but it was nothing new for us. What scared me was the loss of hair and beard.”

Cowboys concerts are known to be very long, did you have to modify them this summer to help Karl?

“Shortly before the start of summer, I removed a few songs from the show. I don't think anyone complained that the concert lasted 1h55 instead of 2h15 [laughs]!”

You are now in charge of programming shows at the Vieux Palais de L’Assomption. How is it going?

“I love it! It was because I was bored during the pandemic that I decided to apply for the position of administrative and cultural manager for the Old Palace. We've wanted to bring this building back to life for years. We renovated it and I brought in a small healthy restaurant café. There are shows of improvisation, humor and music. I haven't been idle! I really wanted to be the one who would pick up on what Françoise, the former owner, had been doing for several years, but with cultural programming. Françoise liked to do weddings, but not me! [laughs]”

Marie-Annick Lépine will be at La Tulipe on Friday, September 23. You must register on latulipe.ca to obtain tickets. The program of the Old Palace of L'Assomption is available here: vieuxpalais.com.