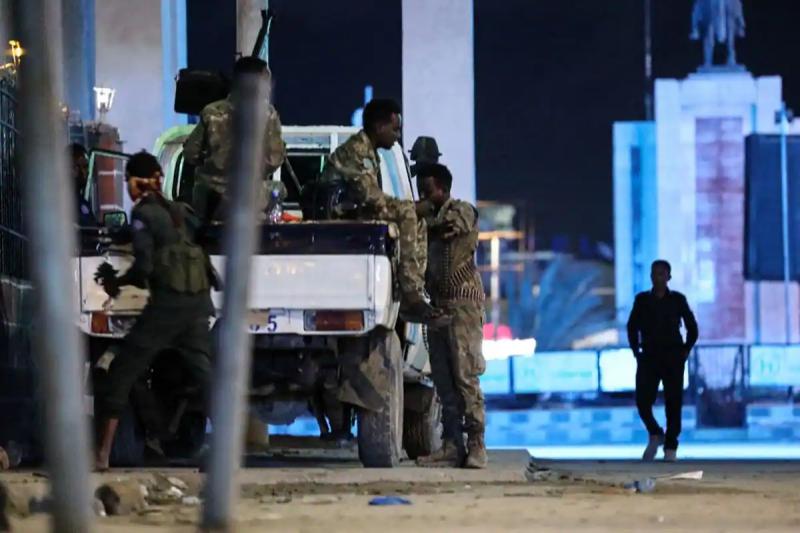 At least eight civilians were killed in clashes between radical Al-Shabaab Islamists, who attacked a Mogadishu hotel in the Somali capital on Friday night, and security forces trying to neutralize them, it said on Saturday a Somali security official.

“Security forces continued to neutralize the terrorists who were surrounded in a room in the hotel building, most people were rescued but at least eight civilians are at this stage confirmed dead,” the official said. , Mohamed Abdikadir.”

Jihadists stormed the popular Hayat hotel on Friday night in an exchange of gunfire and explosions with security forces.

“ Security forces rescued dozens of civilians, including children, who were trapped in the building,” Abdikadir added.

The attackers were still holed up in the hotel early Saturday, with sporadic gunfire and loud explosions heard in the area.

Somali police spokesman Abdifatah Adan Hassan told the press that the explosion was caused by a suicide bomber.

Witnesses said a second explosion took place minutes after the first, causing casualties among rescuers, members of the security forces and civilians who rushed to the hotel after the first explosion.

An Islamist group linked to Al-Qaeda, Al-Shabaab, which has been engaged in an insurgency against the Somali federal government for 15 years, has claimed responsibility for the attack.

“A group of 'Shabaab assailants forced their way into Hayat Hotel in Mogadishu, fighters are firing at random inside the hotel,' the group confirmed in a brief statement on a pro-Shabab website.< /p>

This is the largest attack in Mogadishu since the election of Somalia's new president, Hassan Sheikh Mohamud, in May.

The Al-Shabaab were driven out of the country's main cities, including Mogadishu in 2011, but they remain entrenched in large rural areas. In recent months, they have intensified their attacks.

On Wednesday, the American army announced that it had killed in an airstrike 13 Shebab militiamen who were attacking soldiers of the Somali regular forces in a remote area of ​​this country in the Horn of Africa.

The strike was carried out on Sunday near Teedaan, about 300 km north of the capital Mogadishu, according to a statement from the American military command in Africa (Africom).

The United States carried out several airstrikes on activists in recent weeks.

In May, US President Joe Biden decided to re-establish a military presence in Somalia to fight the Shebab there, approving a request from the Pentagon which deemed the rotation system decided by Donald Trump at the end of his mandate too risky and ineffective.

In recent weeks, the Al-Shabaab have also carried out attacks on the border between Somalia and Ethiopia, raising concerns about the stability in this border region.

The new Somali President Hassan Sheikh Mohamoud said last month that a military approach is insufficient to end Al-Shabaab's violent insurgency, stressing that his government would only negotiate with the jihadist group when the time is deemed appropriate.