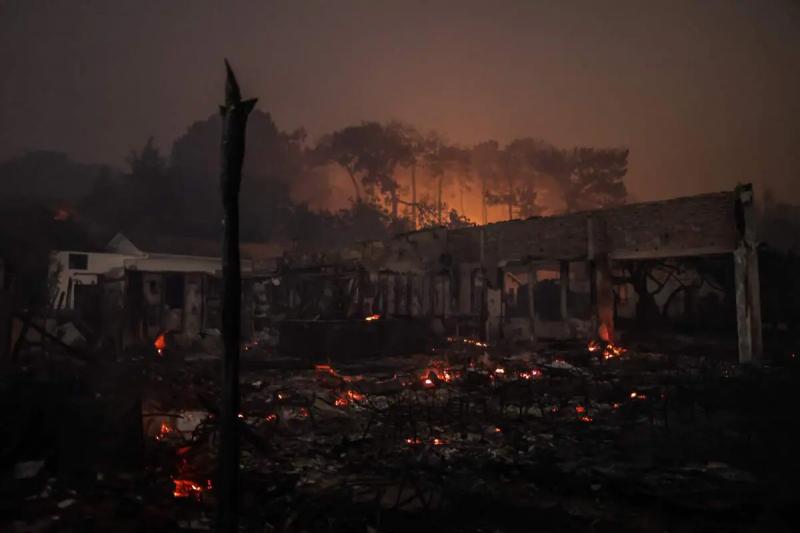 MADRID | Thousands of firefighters continued their relentless fight against blazes in France and the Iberian Peninsula on Friday, where temperatures remained sweltering on Friday as the UK further north prepared for “extreme” heat this weekend. .

In the south-west of France, where two fires have burned more than 7,000 hectares since Tuesday, in particular near the very touristic Dune du Pilat, on the Atlantic coast, the situation “is still unfavorable”, announced the prefecture of the department. de la Gironde (south-west).

These fires, which mobilize a thousand firefighters, have led to the evacuation of 10,000 people since Tuesday.

“I've never seen that and it feels like it's post-apocalyptic, really, it's falling everywhere, on cars, it's worrying,” said Thursday Karyn, a resident of Cazaux, just before the order of preventive evacuation of this village near the Dune du Pilat, enveloped by a large plume of smoke and ashes in suspension.

Triggered Thursday afternoon by the passage of a train , another fire ravaged at least 300 hectares near Avignon, in the south-east, before being fixed.

“Vigilant for a few more days”

In Portugal, more than 2,000 firefighters were still mobilized on Friday to fight in particular against four major outbreaks in the north and center of the country.

If the situation has improved somewhat, the authorities have called for the greatest caution. “We must be vigilant for a few more days (…), prevention is better than cure,” Portuguese President Marcelo Rebelo de Sousa insisted on Thursday evening.

According to civil protection, these fires caused one dead and sixty wounded.

In the Spanish region of Extremadura, bordering Portugal and where thousands of hectares have burned since the beginning of the week, another fire “with an unfavorable evolution” broke out on Thursday afternoon and threatened Monfragüe National Park, a natural area protected for its biodiversity.

If the peak of this heat wave seems to have been crossed in Spain, the heat still left no respite for the inhabitants who will have to wait until the beginning of next week to experience slightly milder temperatures.

Thursday, it was up to 45.4 degrees in the center. The absolute temperature record in Spain dates from August 2021 (47.4 degrees near Cordoba, in the south).

In Portugal, where the mercury reached 47 degrees in the north on Thursday, a record for a month of July in the country, the maximum should drop to 41 degrees on Friday.

In France, on the contrary, the temperatures, which reached 37/38 degrees in the South-West and the lower valley du Rhône on Thursday, should rise again on Friday to 38/40 degrees south of a Bordeaux – Lyon line, but on the other hand decrease to the north of it.

From Sunday, the United Kingdom is preparing to experience “extreme” temperatures, according to the Met office, which could beat the record of 38.7 degrees dating from 2019.

The service NHS public health has warned of a 'jump' in heat-related hospitalizations while train companies have not ruled out unexpected cancellations due to the temperatures.

In Ireland, mercury could rise to 32 degrees on Monday, just below the all-time high of 33.3 degrees dating from 1887.

Forest fires in Morocco: one dead, a thousand families evacuated

One person has died in the violent fires that have ravaged remote wooded areas of northern Morocco since Wednesday, leading to the evacuation of a thousand families, authorities told AFP on Friday.

“The body of a person with multiple burns has been found” in one of the fires in the Larache region, according to a press release from the authorities.

At least 1,600 hectares of forest have been destroyed in the provinces of Larache, Ouezzane, Tetouan and Taza, in the north of the country of Morocco, according to a provisional assessment.

The rapid progression of the flames, fanned by the “chergui”, a hot wind coming from the Sahara, forced 1,100 families to evacuate about fifteen douars (villages) in the burned areas of Larache. In addition, some 645 inhabitants were evacuated in the provinces of Taza and Tetouan.

In Tetouan, near the port of Tangier, around sixty houses burned down and nearly a hundred cattle perished.

In addition to four Canadair water bombers from the army, hundreds of elements from Civil Protection, Waters and Forests, the Royal Armed Forces (FAR) and the Gendarmerie, assisted by local authorities and volunteers, were mobilized to stop the progression of the fire. Reinforcements have been dispatched to the scene.

An outbreak has been extinguished and another is under control in the province of Larache, according to local authorities.

Morocco has been hit for several days by a scorching wave, with temperatures approaching 45 degrees Celsius, in a context of exceptional drought and water stress.