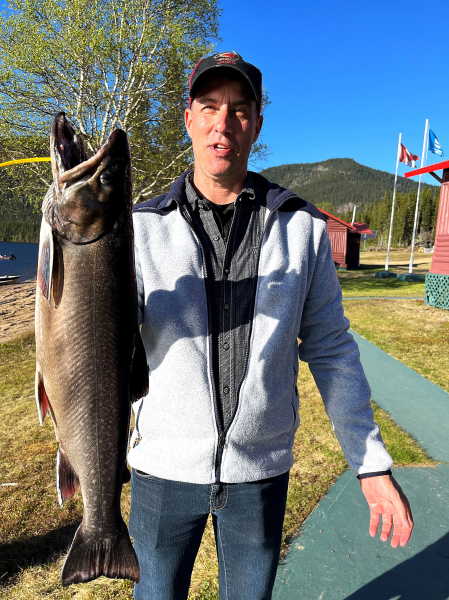 The native brook trout animates the dreams of many enthusiasts eager to break their own record.

Few rod handlers can boast of having crossed the “one kilo” bar. In many areas, local genetics means that we find medium-sized or small fish in these places.

For some, a speckled fish over 1.5 kilo, c is totally impossible. These are inevitably false statements, and the photos are certainly faked or “Photoshopped”. as they say so well.

He was impatient to receive his first customers, a group of 10 enthusiasts who arrived in a Beaver-type fleet plane. At that time, guests were allowed to keep 20 specimens for consumption.

“At the end of the week, I had to call a second plane, just to transport the 200 fish of my clientele, which weighed between 4 and 5 pounds,” explains Mr. Laurin.

85 kilometres northeast of Sept-Îles, on the North Shore, is the watershed of the Manitou River.

On a navigable section of more than 100 km, we discover brook trout resulting from trophy fish genetics. This Eden has its source in the Manitou and Lavaivre rivers and flows into the Gulf of St. Lawrence.

Every year five monsters over 6 pounds and one or two over 7 pounds are outsmarted.

The all-time record weighed 9, 2 lbs. Over time, I have personally caught three fish over 5 lbs.

Despite the great success in terms of the captures, the testimonials and the joy of the guests, the photos, Louis Laurin had to resolve, even if the truth is quite different, to indicate on his advertising pamphlet and on his site that caught specimens with an average weight of one kilo to calm the ardor of certain ill-informed, malicious Internet users, and certain envious outfitters.

I had the opportunity to visit this beautiful part of the country, from June 10 to 13.

In fact, the excursion did not start until the morning of June 11, because the weather conditions were so austere that no helicopter dared to face the skies.

A little bitter to have lost one day, we arrived there on June 11 in the morning and we met Serge Raymond and his son Stéphane who were preparing to leave.

The latter were thrilled, because they both had captured trophies over 6 lbs.

We start our fishing around 10am. By noon, my partner and I had baited five speckles with white jigs and half a dozen with Nipigon spoons.

Nine of our catches were 2-3 pounds and 2 of those- these crossed the bar of 3 lbs. In the afternoon, I fought for a long time a 4 1⁄4 pound ogress and four others over 3 pounds. My companion, Benoît Charbonneau, also obtained similar results.

The next day we intercepted about 20 speckles weighing up to 4 1⁄4 pounds.

To keep this incredible population of fish in health and to guarantee a fishing quality that is still as spectacular as ever, Louis Laurin imposes a quota of five char.

Upon arrival, the fisherman receives four tie-wraps. They will allow him to clearly identify the fish under 3 pounds that he wishes to keep. Another tie wrap, longer, can be affixed to a char weighing more than 3 pounds.

To facilitate the graciation, we ask you to crush the barbs and to use only simple hooks.< /p>

It is possible to opt for an all-inclusive American type package with chef and guide at Lac Manitou. A maximum of 12 guests can take part.

Aside from this package offered to the wealthy, be aware that a European package at Lac des Eudistes or at Brézel is also available.

For an amount of around $1,700 per person, a total of twelve enthusiasts can get there by helicopter, stay in a three-star chalet and use a rowboat and motor, with gas included.

In the spring, harvesting activity takes place on the lake. It is then clever to exploit the various tributaries that bring food and oxygen in abundance.

From August, the speckled head for the waters of the river. At this time, we will try our luck near tributaries and current returns.

To access this fishing paradise, visitors can drive to Sept-Îles .

For Montrealers, it's a 950 km ride. It is also possible to opt for a commercial flight. Until last year, customers went to the seaplane base in Sept-Îles.

For 2023, there is a major change in terms of transportation. Anglers now board a VIP Astar 350 B2 five-seat helicopter from Mustang Helicopters for an approximately 30 minute ride.

Beginning next May, guests will travel aboard a luxurious Astar 350 B2 helicopter to get to the Mabec outfitter.

Once there, everyone has the chance to cross swords with trophy fish.