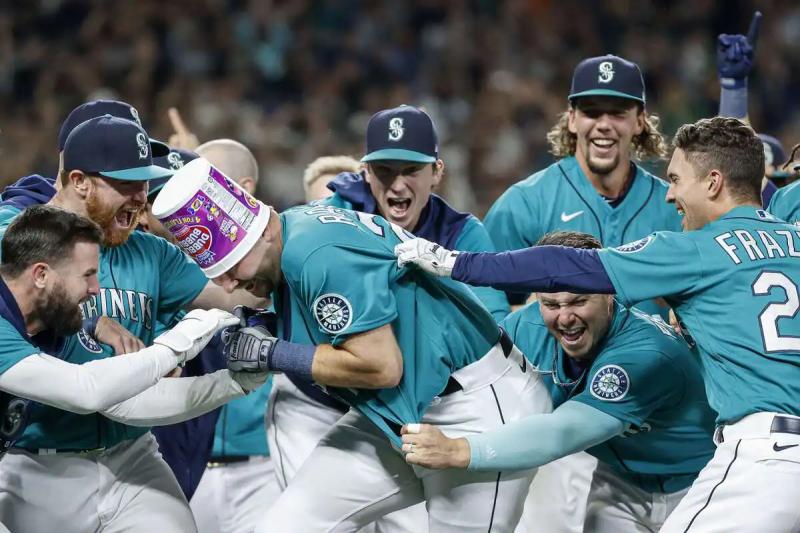 The Seattle Mariners put on quite a show to secure their Major League Playoff qualification for the first time since 2001.

By hitting a long shot circuit to end the game on Friday night in front of Seattle fans, Cal Raleigh also ended the longest drought of its kind in North America for a professional club.

“From the moment I knew the ball was in fair territory, I watched the team and everyone jump. It was crazy,” described Raleigh, quoted on the Major League Baseball website, after the dramatic 2-1 win over the Oakland Athletics.

The hero of the day came up to bat as a pinch-hitter, after two outs in the bottom of the ninth inning, to drive out A's reliever Domingo Acevedo's shot beyond the fence at T-Mobile Park. The 44,754 spectators present then exploded with joy.

“Being in our stadium, with around 40,000 people here, is even better than you can dream of,” said for his part declared the manager of the Mariners Scott Servais.

Possible opponents for the Jays

The Seattle team qualified for the playoffs, while signing their 86th victory of the season against 70 losses. The Mariners join the Toronto Blue Jays and Tampa Bay Rays as three teams drafted into the American League.

The Houston Astros, New York Yankees and Cleveland Guardians are for their part the division champions.

According to the results of the games by the end of the season, a duel between Seattle and Toronto remains likely for a series 2 of 3 to start the playoffs starting October 7.

In the Mariners camp, it should be noted that Quebecer Abraham Toro is part of this team. Limited to a backup role more recently, Toro remains an asset to Seattle due to his defensive versatility and ambidextrous hitting status.

The Quebecer has appeared in 104 games with the Mariners this season, passing nine circuits. He could make the major league playoffs for the second time in his career, having played for the Astros in 2020 during the American League Championship Series against the Rays.

Ty France, Eugenio Suarez and Raleigh, however, remain the most prominent players in Seattle at the dawn of the playoffs.

Young outfielder Julio Rodriguez, author of 27 home runs in 129 games and candidate for the title rookie of the year in the American, is currently on the injured list with back pain. He should be back for the playoffs though.