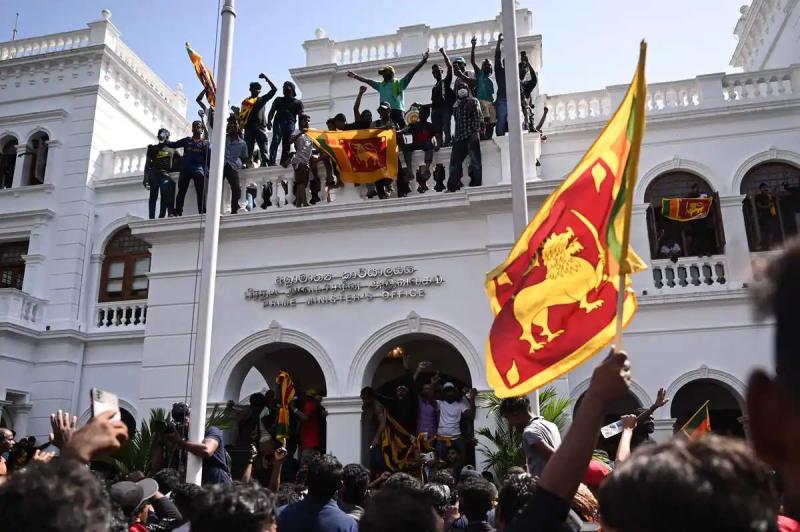 COLOMBO | Sri Lankan protesters withdrew from public buildings occupied in recent days on Thursday, while promising to continue to put pressure on President Gotabaya Rajapaksa, who arrived in Singapore during the day, and the Prime Minister. < /p>

“We are withdrawing peacefully from the presidential palace, the presidential secretariat and the offices of the prime minister with immediate effect, but we will continue our fight,” said a spokesperson for the demonstrators earlier.

Hours before the withdrawal was announced, police repelled protesters trying to enter parliament.

The protesting crowd invaded the offices of Prime Minister Ranil Wickremesinghe on Wednesday after doing the same on Saturday with the palace of President Gotabaya Rajapaksa, forcing him to flee abroad.

Nearly 85 people were injured in the clashes and one man died of suffocation from tear gas.

Hundreds of thousands of people have visited the presidential palace since it opened to the public after Mr. Rajapaksa fled on Saturday.

Thursday afternoon, the gates of the building were locked and guarded by men in arms.

Earlier in the day, Gihan Martyn, a 49-year-old trader accused the president of “playing for time”.

“He's a coward,” he growled outside the presidential palace, “he ruined our country with the Rajapaksa family, so we don't trust him at all. We need a new government.”

The army and police received new orders on Thursday to firmly suppress any violence, and warned troublemakers that they were “legitimately entitled to exercise their strength”.

Nothing to scare Chirath Chathuranga Jayalath, 26-year-old student: “You cannot stop these demonstrations by killing people. They will shoot us in the head, but we do this with our hearts,” he said.

Mr. Rajapaksa had promised to resign on Wednesday but no announcement was made.

According to security sources, the resignation could be announced on Thursday, now that he has left the Maldives.

“The letter of resignation has been prepared”, explains the source to AFP, “as soon as he gives the green light, the President of Parliament will publish it”.

After a day of stopover in the Maldives, Mr. Rajapaksa indeed joined Singapore, with his wife Ioma and two bodyguards, aboard a commercial Saudia flight. They were escorted onto the plane a few minutes before takeoff.

The head of state, according to local press, had initially demanded a private jet, refusing to take a commercial flight with d other passengers because of the hostile reception he received when he arrived in the Maldives on Wednesday.

He had been jeered at and insulted as he left Velana airport and a protest was held in the capital Malé to demand that the Maldivian government not allow him to pass through safely.

The media Maldivians report that Mr. Rajapaksa spent the night in the luxury hotel Waldorf Astoria Ithaafushi, and draw a parallel between this opulence and the economic crisis that the Sri Lankan population is going through, the worst in its history.

According to diplomatic sources, the United States refused him a visa application because he had renounced his American citizenship in 2019 before being a presidential candidate.

Singapore will not be his final destination . The city-state clarified that Mr. Rajapaksa was on a private visit.

“He did not seek asylum and no asylum was granted to him. Singapore does not generally accept asylum applications,” the Foreign Ministry said in a statement.

According to sources close to Sri Lankan security, Mr. Rajapaksa would seek to stay for a while in Singapore before joining the United Arab Emirates.