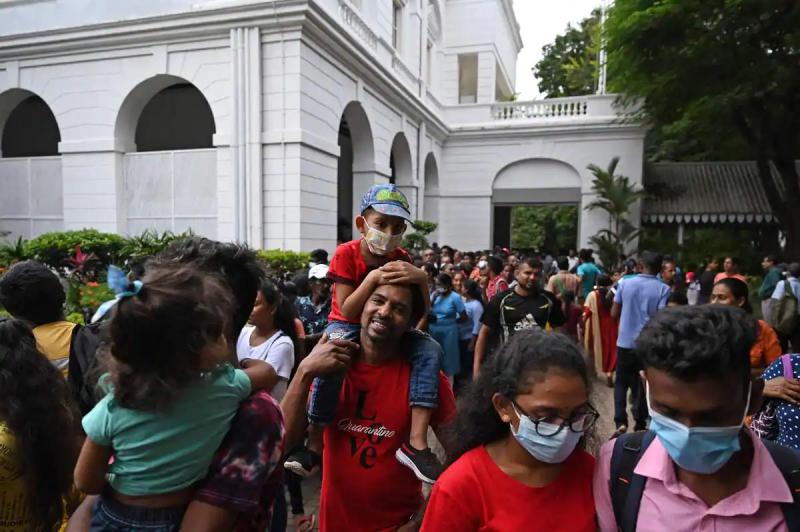 Sri Lanka's disputed president was stuck at Colombo airport on Tuesday after a humiliating face-off with immigration officials barred him from going into exile abroad, according to official sources.

Immigration officials denied Gotabaya Rajapaksa access to the VIP lounge to have his passport stamped, while the head of state wanted to avoid the terminal open to the public, fearing the reaction of the population.

Having not yet resigned, which he promised to do on Wednesday for a “peaceful transition of power”, Mr. Rajapaksa enjoys presidential immunity. He might want to take the opportunity to seek refuge abroad.

The head of state and his wife had spent the previous night at a military base near the international airport after missing four flights that could have taken them to the United Arab Emirates.

His younger brother Basil, who resigned as finance minister in April, also missed his flight to Dubai after a similar confrontation with immigration.

Basil tried to use a service chargeable concierge service for business travellers, but airport and immigration staff have announced the removal of this fast service with immediate effect.

“Some other passengers protested against Basil boarding their flight,” an airport official told AFP. “It was a tense situation, so he left the airport in a hurry.”

Basil, who also has US citizenship, had to apply for a new passport after leaving his in the presidential palace as the Rajapaksa family fled on Saturday in the face of an onslaught of thousands of protesters, according to a diplomatic source.

The Sri Lankan president left behind a suitcase full of documents and 17.85 million rupees (49,000 euros) in cash, now under seal.

The office of the president does not communicate on his situation, but Mr. Rajapaksa remains the commander-in-chief of the armies, thus having military means.

He still has the possibility of taking a military ship to go to India or the Maldives, according to a source from the defense.

If the head of state resigns as promised, Prime Minister Ranil Wickremesinghe will automatically be appointed interim president until parliament elects an MP who will hold office until the end of the current term, c i.e. November 2024.

Mr. Wickremesinghe is, however, also contested by the demonstrators who have been camping in front of the Presidential Secretariat for more than three months to demand the resignation of the president because of the unprecedented economic crisis that the country is going through.

Mr. Rajapaksa is accused of having mismanaged the economy, leading to the inability of the country, in lack of foreign exchange, to finance the most essential imports for this population of 22 million inhabitants.

Colombo defaulted on its $51 billion foreign debt in April and is in talks with the IMF for a possible bailout.

Sri Lanka has almost run out of gasoline reserves. The government has ordered the closure of non-essential offices and schools to reduce travel and save fuel.