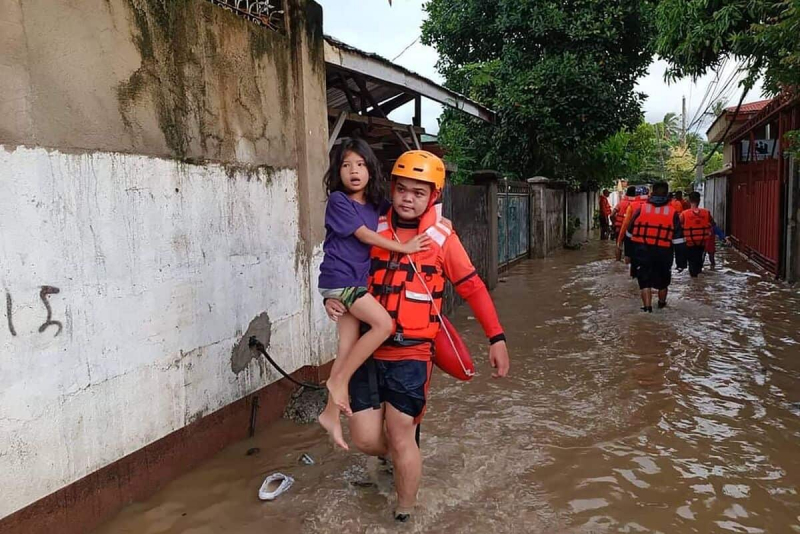 Tropical Storm Nalgae, which slammed into the Philippines on Saturday, now threatens the capital Manila after claiming at least 45 lives from flooding and landslides in the archipelago, according to a new balance sheet revised downwards.

The country's civil defense officials acknowledged that rescue teams sent to the south of the country, inundated by floods, on Friday had made errors in their counts, which led to some deaths being recorded twice. &nbsp ;

“When we gathered the balance sheets […], we realized that there were only 40 dead, 31 injured and 15 missing,” Naguib Sinarimbo told AFP. , spokesperson and head of civil defense for the southern region.

Five other people died elsewhere in the country, said the head of national civil defence, bringing the new count to 45 dead. 33 injured.

“It will be important for us to look back and see why this happened. Why didn't we manage to evacuate them? Why is the number of casualties so high?” asked the president.

In Leyte, an island in the central Philippines, rescuers used a fridge as an improvised boat to save children stranded by the waves, as evidenced by photos published by the coast guard.

Nalgae, expected since Thursday, finally hit the main island of the Philippines, Luzon, on Saturday at dawn, accompanied by winds reaching 95 km/h, an hour after making landfall on the sparsely inhabited island of Catanduanes.

Rescue workers are now focusing their efforts on the village of Kusiong, where dozens of bodies were found on Friday.

Heavy rains began Thursday evening in the area. Floodwaters have invaded several towns and villages on the island of Mindanao, carrying trees, stones and mud in their path. Some 500 homes were destroyed.

But Nalgae could also hit the capital Manila, the Philippine Meteorological Service has warned.

“Wide flooding and rain-triggered landslides” are expected in the capital of 13 million of people, specifies the bulletin. There is “minimal to moderate risk of a storm” or huge waves hitting coastal areas.

“Based on our projections, this storm is very strong and we have prepared for it,” said Alejandro, adding that 5,000 teams of a few rescuers each were ready to intervene.

< p>Residents living in or near the path of the storm are urged to stay home.

The storm hit at the start of a long weekend in the Philippines, where millions of people return to their hometowns to pay their respects at the graves of their loved ones.

But the coastguard has suspended ferry services in much of the archipelago where tens of thousands of people board boats every day.

And 100 flights have been put on hold, the civil aviation office said.

More than 7,000 people were evacuated before the storm hit, according to the civil defense office.&nbsp ;

An average of 20 typhoons and storms hit the Philippines each year, killing people and livestock in their path, and ravaging farms, homes, roads and bridges, although the south is rarely affected. &nbsp ;

As the planet is affected by global warming, storms and typhoons are becoming more powerful, warn scientists.

In late September, Typhoon Noru killed at least 10 people in the Philippines, including five rescuers. Tropical Storm Megi, which hit the country in April, claimed at least 148 lives and caused massive landslides.