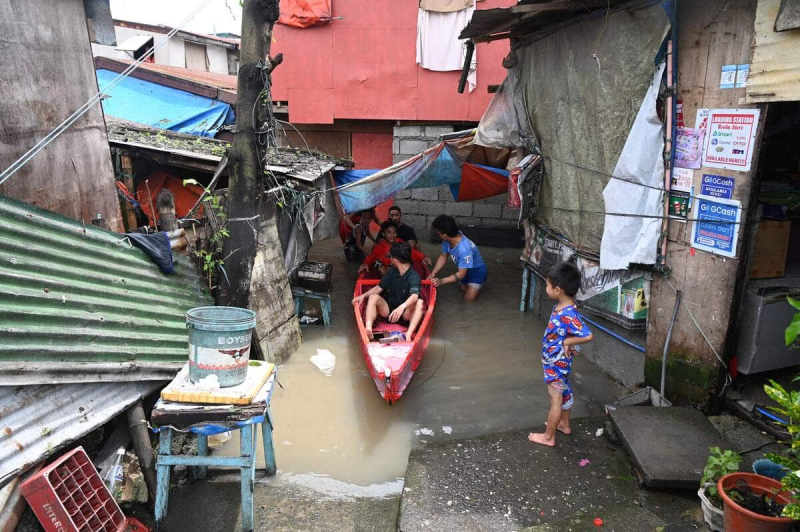 Rescue workers were busy in Manila on Sunday to help residents trapped by floodwaters caused by Tropical Storm Nalgae, which has killed at least 48 people since arriving in the archipelago before breaking. away from it.

The storm hit the main island of Luzon overnight from Saturday to Sunday, sweeping away everything in its path and causing power outages. Manila and nearby towns suffered flooding.

In Paranaque, a suburb of Manila, rescuers had to swim through three-meter-high floodwaters overnight to reach 60 people, including children, stranded on the top floor of a building, said a local official.

“They were screaming and crying in panic because they had no way out,” village chief Noel Japlos told AFP. Several people found themselves stranded by the flood on their way to a party.

“We didn't expect the water to rise so high. If we hadn't saved them, some might have died,” he said.

In the nearby town of Kawit, a corpse in a white coffin floated down a flooded street , saw an AFP photographer. The coffin was likely washed away during a flash flood at a nearby cemetery, locals say.

“It's so difficult […] we can't get around because of the floods and we have a two-month-old baby who can't sleep because there's no electricity,” he said. to AFP Andinor Cairme.

The latest report released by the authorities on Sunday reported 48 dead. Most of those victims died in landslides and flooding Friday in Mindanao after heavy rain heralded the arrival of Nalgae.

The storm was receding Sunday afternoon at Sea from southern China, the Philippines Meteorological Service said.

According to the civil defense, 22 people are missing, and 40 people are injured.

In On average, 20 typhoons and storms hit the Philippines each year, killing people and livestock in their path, and ravaging farms, homes, roads and bridges, although the south is rarely affected.

A As the planet is affected by global warming, storms and typhoons are becoming more powerful, scientists warn.