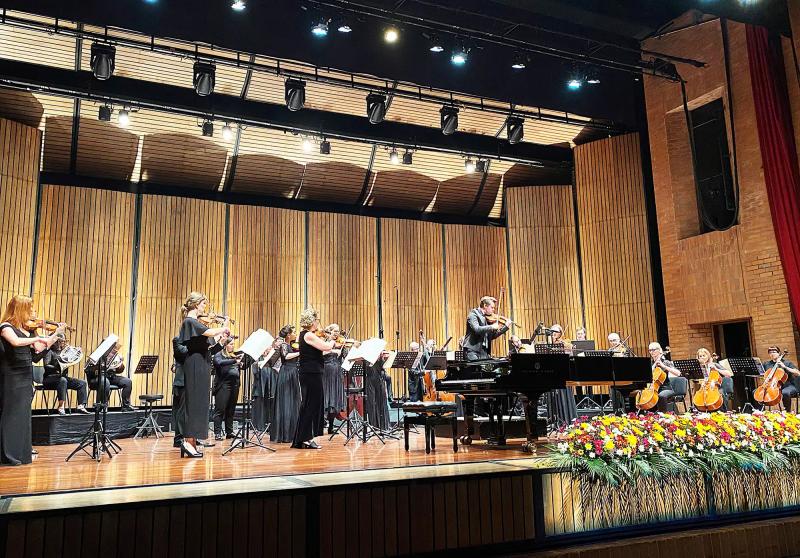 MEDELLIN | The day after the grand premiere of the Longueuil Symphony Orchestra's South American tour in Bogota, the musicians and their conductor Alexandre Da Costa were already flying to Medellín. The second performance of Stradivarius in Viennawas held in the city's largest theatre, the Teatro Metropolitano.< /p>

“We do this job for the pleasure of playing for a lot of people from everywhere and I must admit that this tour, I did not believe it six months ago, after everything that happened with the pandemic”, a explained bassist and veteran Gilbert Fleury all smiles after the first concert of this South American tour.

The day after this premiere, which visibly charmed the public in Bogota, the musicians and maestro Da Costa were happy and proud of their performance. And this, despite the fatigue of this trip involving many trips and, for some, some physical hazards related to high altitude (the capital of Colombia is still located at 2640 meters above sea level).

“With Alexandre, we don't play with the head, we play with the heart”, launched the cellist of Serbian origin Bojana Milinov, on the terrace of the hotel in Medellín a few hours before the general practice.

It is indeed with the heart that Alexandre Da Costa plays the Stradivarius and conducts his orchestra, to the delight of the spectators who often find themselves first shaken, then quickly amazed by his unique technique and his contagious energy.&nbsp ;

Think off the beaten track

Upon arrival in Medellín, the troupe took time to soak up the sun in the capital of the mountainous province of 'Antioquia and to share the anecdotes and emotions experienced the day before.

“A tour as a musician internationally is incredible,” confided Martine Michaud, who has played with the OSDL since 1988. departure. For all of us, it will be a beautiful memory. »

Among the musicians of the orchestra, a feeling seems unanimous: the arrival of Alexandre Da Costa has brought them out with pleasure from a certain “middle”. “He loves to think outside the box and we like to follow him there,” continued the violinist.

The conductor had just shared with Le Journal, during a daily discussion about music, almost never consuming classical music in everyday life.

“I love classical music, but I never listen to it, I live it,” he said.

Built by the famous architect Ariel Escobar Llanos, the Metropolitan Theater José Gutiérrez Gomez welcomed the OSDL on Friday evening between its geometrically inspired walls, its wide vertical planes in slightly inclined bricks (designed to respond to the acoustic design of the hall) and its concrete and wooden panels suspended, acting as sound reflectors.

In the largest theater in Medellín, inaugurated in 1987, the concert evening was as magical as the previous one. Perhaps a little because the altitude was lower, but certainly because the musicians of the Orchester symphonique de Longueuil once again let themselves be imbued with the energy, charisma and wholeness of their maestro at heart.