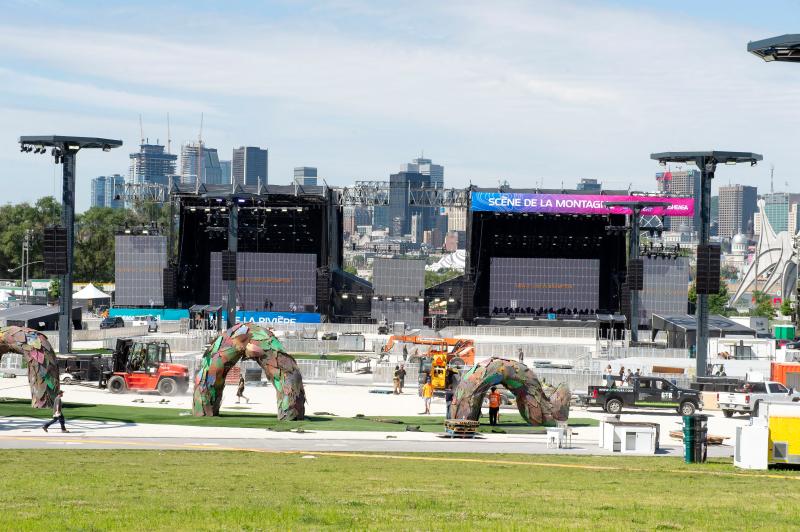 Two headliners to replace, other groups that can no longer come, a worrying seventh wave of COVID. For its 15th edition, the organization of the Osheaga festival did not have it easy. But a few hours before launching the festival – the first at maximum capacity in three years – the excitement was palpable on the Parc Jean-Drapeau site.

“I don’t remember more what a “real” festival looked like! said an Osheaga employee as the media visited the festival site. It is true that the last “normal” Osheaga to have been presented dates back to 2019. Last year, evenko had presented a reduced edition, called The reunion.

This year, we return to the usual programming: a hundred groups from the four corners of the planet. But since COVID is still part of our lives, the puzzle was much more complex this year.

While for a normal year last minute cancellations are of the order of one or two artists, this year there are at least half a dozen. Still Thursday, Osheaga announced that Anfisa Letyago and AMA LOU could no longer participate in the festival. In recent weeks, Damso, Lil Tjay and Beabadoobee have also withdrawn.

“It's the reality of what we're going through”

That's not counting the headliners Foo Fighters [due to the death of drummer Taylor Hawkins] and A$AP Rocky [for his legal problems] who also had to be replaced.

“A year like this, let's hope we won't have it again,” says Osheaga's head of programming, Nick Farkas. We could be completely depressed. But we have no choice. The show must go on, as they say. This is the reality of what we are going through right now. »

Osheaga programming manager Nick Farkas said he was “stressed and excited” on the eve of the festival.

The programmer refuses to be discouraged by this bad news, which complicates his work even more. And he hopes that festival-goers will be indulgent. “With what we have been through [with the pandemic], I think people are used to seeing business change. We are doing our best to continue with the programming we have planned. But it certainly adds a level of complexity to something that is already hypercomplex. »

Because other cancellations could still occur in the next few hours, the Osheaga team has asked a few artists to be ready. “We like having it as a back-up just in case, says Nick Farkas. They are on site [during the festival] and are ready to play if ever we need them. »

Recent news from the Festival d'été de Québec, which has been the site of several COVID-19 outbreaks, has Osheaga organizers concerned. But unless there is a strict request from public health or the government, no new health measures will be put in place during the event, says Nick Farkas. “However, people are encouraged to put on masks if they feel more comfortable doing so. »

►The 15th edition of the Osheaga festival will take place from Friday to Sunday, at Parc Jean-Drapeau. osheaga.com.

Some new features for the 15th edition of the popular festival

Festival-goers who visit the Osheaga site this year, at Parc Jean-Drapeau, will see a slightly improved festival compared to last year when the site was filled to capacity, in 2019.

That year, the promoter evenko inaugurated the new version of the Île Sainte-Hélène site, which it had redeveloped with the cost of several million dollars. After two years of forced shutdown by the pandemic, it is therefore the second edition which will take place this year on the redeveloped site. Its total capacity is now 55,000 people per day.

During the traditional media visit on Thursday morning, the organizers were very proud of having succeeded in moving the sound consoles, usually placed directly in front of the main stages and which hide a good part of the sight of several spectators. This time, the consoles will be located a little on the outskirts, so that spectators at the bottom of the hill will have a full view of the two main stages.

On the Plaine des Jeux side, we chose to place the Green and Valley stages side by side, like the main stages. Festival-goers will therefore have no downtime between shows.

Finally, the food offer has been greatly improved. In addition to traditional snack bars, Osheaga will host several Montreal restaurants in its YUL EAT Gardens.

Hardcore punk band from Baltimore received stellar reviews for their third album, GLOW ON, released last year. Recognized for their frenzied performances, the musicians recently played at the Coachella festival, where spectators were not shy to jostle each other.

We were supposed to have the Foo Fighters , we will rather have the local darlings. Replacing Dave Grohl's band, which canceled all of its shows following the death of drummer Taylor Hawkins, Arcade Fire returns to Osheaga for the first time since 2010.

The 31-year-old Japanese-American artist already has six albums in her career. His two most recent, Be the Cowboy (2018) and Laurel Hell (2022), have received excellent reviews.

“I think it's going to be one of the shows of the weekend,” says programmer Nick Farkas, of this intriguing American duo from St. Louis. If you go and see their music videos, it's completely different from the majority of things that are happening in music right now. »

This is one of the concerts most likely to create congestion in Osheaga crowd traffic this weekend. Scheduled on the small Scène des Arbres, the two musicians of this British duo have seen their popularity take on a dazzling scale with the release of their very first album, in April.

Six days after igniting the Bell Centre, Dua Lipa does it again at the end of the festival. “It's not ideal to have the headliner of your festival in concert a few days earlier in town! recognizes Nick Farkas. But we absolutely wanted to keep the show at the Bell Center, for those who had bought tickets.

Like Turnstile, Idles are among the most intense bands to hit the boards of Osheaga , This year. Nick Farkas mentions that he will be torn, like some other festival-goers, by the Sunday evening schedule, which will pit Idles against Dua Lipa.