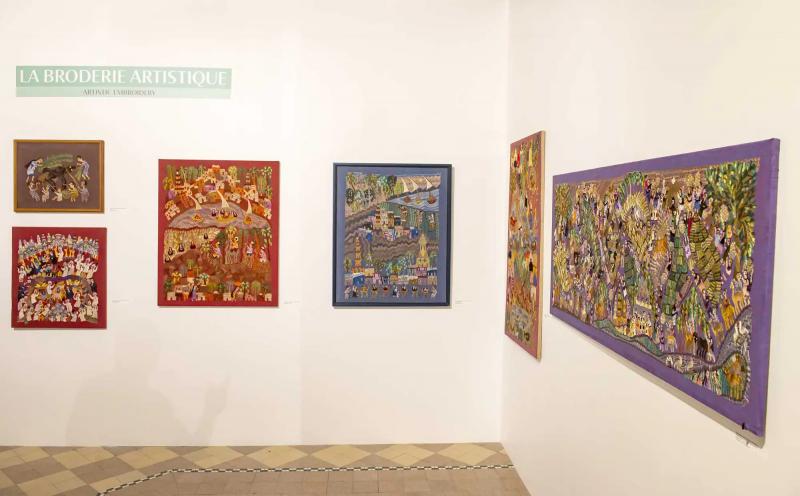 MUMAQ presents a fascinating exhibition called Akhmîm, Egypt: 4000 years of textile art. A second exhibition dedicated to to the copper enamel work of the Quebec craftsmen couple Passillé Sylvestre and the permanent exhibition Testimonies, a history of Quebec crafts. The MUMAQ is this little-known museum, yet exhibiting its many treasures in a sumptuous old church.

Little is known about the Musée des métiers d'art du Québec. Inaugurated in 2021, the place has already won the Canadian Museums Association's Excellence Award, and you understand why as soon as you enter.

First of all, the place impresses: an old church on Dorchester Street which was sold for $1 to the Holy Cross Fathers in 1930, then literally dismantled and rebuilt where it stands today.

Below, the Émile-Legault performance hall, inside, a huge exhibition hall that has nothing to envy to the great museums of the metropolis, and even higher, a magnificent and an organ that would be the second in Montreal in terms of sound quality.

The women of the Akhmîm art center began to embroider when they were little girls.

In its enclosure, three exhibitions are presented, including the short story that immerses visitors in the intriguing Egyptian weaving traditions dating back 4000 years. Four millennia of textile art customs told through photos, videos, contemporary and older weavings, and buried and found pieces of work dating back thousands of years.

An art and a trade often transmitted from mother to daughter, having enabled the women of Upper Egypt to emancipate themselves (even to the point of earning sometimes even more money than the men).

Each stage of the process and creative path is explained.

The main idea is to allow us to admire the works skillfully and meticulously embroidered using looms, requiring as much concentration as physical effort from the weavers. We quickly understand, however, that it is also a whole revolution that this form of art has allowed Egyptian women to live.

The visitor thus immerses himself in the history of the textile art center of the city of Akhmîm and that of some of the 200 women who have worked for more than 60 years in a community center where they have taken up this long textile tradition once reserved men (including the most famous, Mariam Azmi). A project that has made it possible to maintain its original vocation as a textile art center in Egypt and which touches your heart when you discover and understand the history and journey of the women artists who now weave their names there.