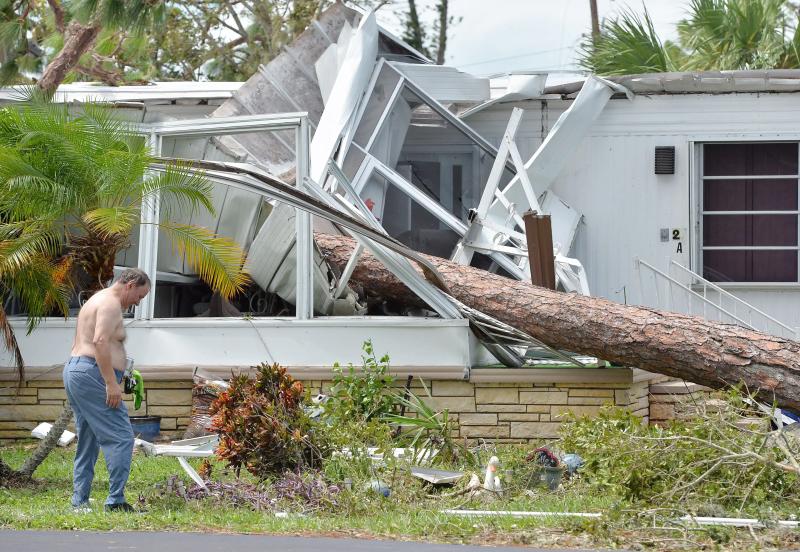 Quebecers saw their dream of retirement snatched from them in a few minutes by Hurricane Ian which destroyed entire neighborhoods on the west coast of Florida on Wednesday.

Scene of desolation in Fort Myers Beach the day after Hurricane Ian hit the west coast of Florida.

“It’s a bereavement. I'm quite shaken, ”says Lise Soucy on the phone, from her residence in Deux-Montagnes.

The retiree had owned since 2019 with her spouse Rémi Brazeau a mobile home in a park designated for this type of housing in Fort Myers Beach, located 2:30 a.m. south of Tampa, in the heart of the area most affected by the Hurricane Ian.

Stan Pentz surveys the damage in the Iona neighborhood of Fort Myers.

This one came to devastate this area on Wednesday, as images of the mobile home park circulating on social media showed homes submerged in flooding.

“What we were told by other residents is that there is 10 feet of water everywhere in the park. For us, that means it gets to the roof.

Employees carry a lady out of an Orlando nursing home.

“The loss of life that we had created in that community is worse than the financial loss. We had met new friends. That’s what touches me perhaps even more,” breathes Ms. Soucy, trying to hold back her tears.

Several Quebecers suffered heavy losses. Because if eastern Florida is known as the great destination for snowbirds here, the west coast also has its followers.

A photo of Micheline Boulanger in front of her house in Bonita Springs before the hurricane.

From their home in Val-d'Or, Gilles Paquin and his wife Micheline Boulanger were warned by their tenant during the passage of the hurricane that their Bonita Springs property was leaking.

“The house was completely flooded and the furniture was destroyed,” says Mr. Paquin. Our tenant is fine, even if she had to sleep in a high corner of the house, because it was impossible to move outside. »

The residence of Micheline Boulanger after the devastating passage of Ian.

As the house is not insured, the damage will “probably be around $50,000”, estimates the 62-year-old man, who will take the road on Friday with his wife in the direction of Florida, where they will begin repair work themselves.

Notice on the wall how high the water rose in this Naples resident's garage.

For Louise Belisle, also the owner of a flood-ravaged mobile home in Fort Myers, the loss is “total”.

“We saw aerial photos of our homes underwater , mine is ruined, saddens the 67-year-old woman. All my savings are gone, I have nothing left.

The Franco-Ontarian from Marionville said she was “happy to be alive”, as she planned to return to her home in Florida at the end of the month. October.

You could feel the despondency of Brenda Brennan Thursday in Fort Myers after the passage of a boat that ran aground on the wall of her apartment.