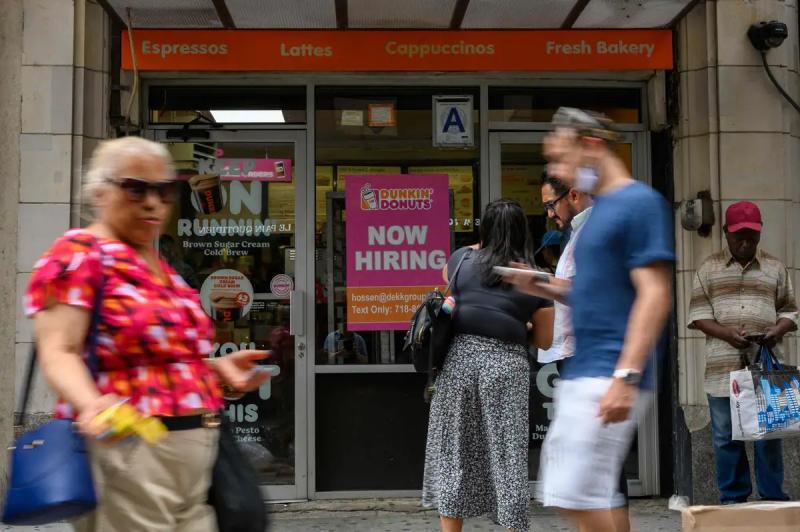 WASHINGTON | The U.S. labor market showed unexpected momentum in July, returning to pre-pandemic levels as the fight against inflation raises fears of a recession, good news for Joe Biden a few months before the crucial election midterm.

There are now “more people working in the United States than before the pandemic began” and even “than at any what a moment in American history,” greeted the American president from the White House.

The country regained the 22 million jobs that had been lost with the pandemic, and the unemployment rate fell back to 3.5%, the same rate as in February 2020. The labor market was then at its best. shape in 50 years.

Employment health is currently under intense scrutiny in the United States. If this rebound confirms the idea that the first economy in the world is not in recession, it is however bad news for inflation.

“This remains one of the strongest job markets in 50 years, no comfort for those hoping for a slowdown that would reduce inflation,” said Mike Fratantoni, chief economist of the Mortgage Bankers Association. real estate bankers).

In July, twice as many jobs as expected were created (528,000 hires), the Ministry of Labor announced on Friday, in all sectors, including leisure and hospitality, professional and commercial services and care. health.

In addition, job creations for May and June have been revised upwards to 386,000 and 398,000 respectively, which represents 28,000 more jobs than announced.

But that is unlikely to last, however, as “labour demand is expected to […] moderate in the second half of 2022 as businesses face higher costs, reduced consumer demand and lower profitability,” according to Kathy Bostjancic, an economist at Oxford Economics.

Meanwhile, competition remains fierce among employers, who seek to attract too few workers.

Consequently, wages continue to rise. The average hourly wage in the private sector is now $32.27; it is therefore 5.2% higher than a year ago.

However, this is not enough to offset inflation, which reached 9.1% over one year in June.

Joe Biden assured understand the difficulties of families who have “a job and who face the rising prices of food, gasoline and many other goods”. He pressed the Senate to pass his big health and climate investment plan.

The US Federal Reserve (Fed) is taking steps to try to cool the overheating economy. To do this, it raises its rates to make credit more expensive and therefore encourage consumers to spend less.

These figures should weigh heavily in the balance at its next monetary policy meeting at the end of September, and convince its officials to strike hard. They could raise rates again by three-quarters of a percentage point, like in June, then July – not seen since 1994 and a far cry from the usual quarter-point increase.

“ It's good to see so many jobs being created, but it's scary to imagine what that means for the size of the adjustment we might see coming,” commented Jason Furman, professor of economics at Harvard and former economic adviser to the White House under Barack Obama.

The New York Stock Exchange thus moved into the red on Friday, fearing an even stricter attitude from the Fed.

First Signs of a slowdown in employment had emerged, however.

The number of job vacancies fell in June, falling to a nine-month low, but quits remained high, according to Bureau of Labor data. Statistics published on Tuesday.

As for weekly jobless claims, which give an indication of the number of li censures, they started to rise again at the end of July. The four-week average even reached its highest level since November.