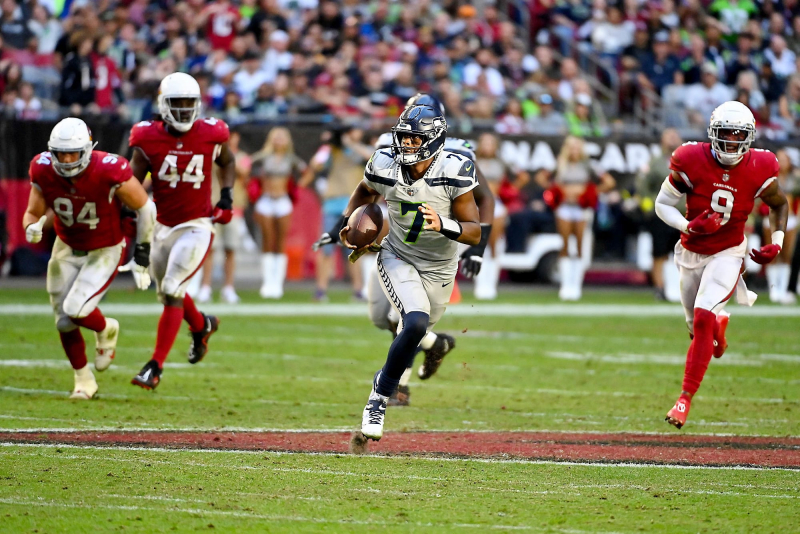 At mid-season in the NFL, there are pleasant surprises both collectively and individually. Disappointments are there too. Several events could still change the course of things in the second half.

Among the most beautiful surprises, difficult to find better than the two New York clubs. Both the Jets and the Giants were in theory to spawn with the shallows or, in the best possible scenario, start a slow progression.

The Jets have defied all predictions by even offering teams such as the Bills and the Dolphins to their roster. Their rich crop of rookies greatly improved the team, which would earn the fifth playoff berth in the American Conference at this point.

For their part, the Giants would also be a playoff with a sixth place in the National Conference, an unexpected performance. Wins over the Titans and Ravens show this team should be taken seriously.

Among other big surprises, the Seahawks have nothing to envy anyone. They figured for many as logical candidates to get the first choice (or among the first, at the very least) of the next draft. They also hold the pick of the Broncos, which will position them advantageously.

Should the Eagles be considered a surprise? I saw them winning their division, but it was hard to imagine them undefeated at mid-season.

In terms of disappointments, many are fighting, starting with those who were considered serious contenders for top honors, the Packers, Rams and Buccaneers. Of the lot, only the Buccaneers seem to be still able to recover their season, in a weak division.

And what about the Raiders and the Broncos, who, rather than fighting for the head of the famous division West, are having a basement bottom duel so far? Also add the Colts, Cardinals and Saints to the department of underperforming clubs.

On an individual level

Undoubtedly the greatest surprise on an individual level across the entire league is quarterback Geno Smith, who shows that you never have to stop hanging on, even after eight years on the bench! Tua Tagovailoa with the Dolphins has also silenced his critics, countless for two years.

In this position, disappointments jostle. Aaron Rodgers, Russell Wilson, Matthew Stafford, Matt Ryan and Baker Mayfield are just a few players who failed to live up to expectations.

In the second half of the season, many eyes will be on the Browns when Deshaun Watson returns to action on December 4th. The team's ground game is devastating and Watson will keep fans dreaming despite his misconduct. In Cleveland, we would pay a lot to buy a victory … It remains to be seen how much the quarterback will feel the rust of almost two years of inactivity.

The situation in Washington will also be interesting. Will owner Dan Snyder finally lift the hats after years of terrible management by selling his club for a huge fortune? A nice parting gift for him, but even more for the supporters.

Impossible to conclude without mentioning the possible retirement of Tom Brady. He won't be talkative about it and he's often mentioned that he doesn't want his last games to turn into a farewell tour. To be continued…

The Buccaneers and Seahawks will feature at 9:30 a.m. in the NFL's first-ever game played on German soil, in Munich. Buccaneers quarterback Tom Brady has had his share of troubles this season, but despite it all, he takes jealous care of the ball. This season, he is now at 373 straight passes without an interception. If he attempts 30 passes against the Seahawks without larceny, he will break Aaron Rodgers' record, who threw 402 passes in a row without being intercepted in 2018.

The family will be in the spotlight this week. In the duel between Bills and Vikings, brothers James and Dalvin Cook, both running backs, face off. Receivers for the Bears and Lions respectively, Equanimeous St. Brown and Amon-Ra St. Brown will also be opponents. We should not forget the cousins, Browns carrier Nick Chubb and the one who will try to stop him, the defensive end of the Dolphins Bradley Chubb. If defensive end Joey Bosa is healthy, he will face his brother Nick, at the same position with the 49ers.

The Eagles' perfect record is due to several factors and one of them is their turnover game. The team leads the league with a plus-15 turnover differential and leads the league in induced turnovers with 18. According to NFL Research, if their turnover ratio is still positive this week, they will be first since the 1958 Colts with a positive differential in nine straight games.

This season, no less than 42 games have been decided when a team went for the win in the fourth quarter. This is more than ever before after nine weeks of activity. It should be noted that the Vikings and the Giants are the best performers for this purpose, with four wins each when trailing in the fourth quarter.

Chargers quarterback Justin Herbert already boasts 19 games of 300 yards or more passing since his 2020 debut. 49ers, he will become the first quarterback to score 20 in his first three seasons. He's tied for Andrew Luck's 19 with the Colts between 2012 and 2014.