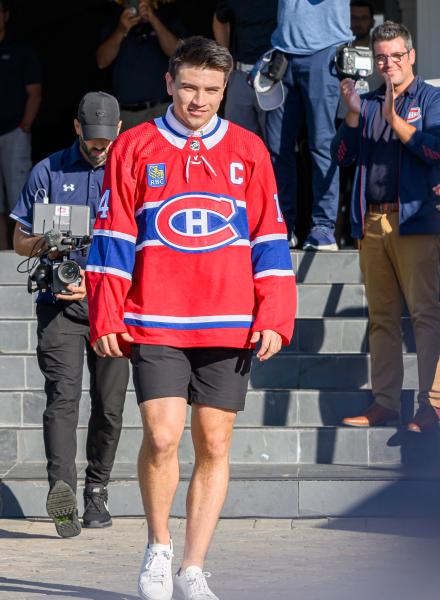 In Quebec, we are called intolerant and spoiled babies because we demand (no, not even, we ask lip service) that the captain of the tricolor speaks French.

The only official language is French, hockey is THE national sport, but we should crash and above all not ask too much to poor little Ontarians paid to push the puck for the Sainte-Flanelle.

I can't wait for Quebecers to get a spine transplant and stop apologizing for speaking French.

When news broke that François Legault wanted Suzuki to improve his French, Global News reporter Elizabeth Zogalis shared with his Twitter friends the comment of an Anglo who said: “I hate it here (in Quebec) sometimes. I'm so tired of this. “Ben coudonc! Anglos who are tired of Francos defending French…

In reaction to Legault's comments about Suzuki, National Post columnist Chris Selley countered that it was proof that Quebec is not a “normal” province.

Then he clarified his thought. “Here is the prime minister who promised to put aside bitter quibbles and concerns of the past to focus on the economy.”

So for this august columnist , you can't chew gum and walk at the same time, talk about the economy and defend French. And what is it, this idea that promoting French is a quibble and a corny and outdated thing?

Does Chris Selley find that it was “outdated” in 2019, when the Toronto Sunspoke of young rookie Vladimir Guerrero Jr. saying that the Blue Jays were encouraging this young Spanish-speaking player to “immerse himself in English”?

Are people in Toronto who make English a “priority” called intolerant? < /p>

TSN (The Sports Network) yesterday asked its fans in English on Twitter: “Should it be mandatory for Suzuki as captain to learn French? You should see the amount of French Quebecers who responded that they were tired of the old language debate and that the only important thing was that he played well.

It's not the first time I'm telling you: the real threat to French in Quebec isn't the fussy Anglophones, it's the submissive Francophones.

We know that Suzuki spent the summer practicing French with the Babbel platform. But we can also give him cultural suggestions to improve his French.

For example, a song by two young Quebec stars Fouki and Alicia Moffett.

The song s 'titled Ciel and here is a sample of the lyrics:

“You can roll but I fly/She get low when I' m high/Imma do what I want /Did it big 'til I die/Nobody can't stop me no/On the road like a trucker/Don't think it's easy no/Had to work/Yeah wo/Where is he?/We looked for him everywhere in the city/The poor man has his brains in work/Where is he?/You can't leave the bird in its nest »

The French ? Don't think it's easy…