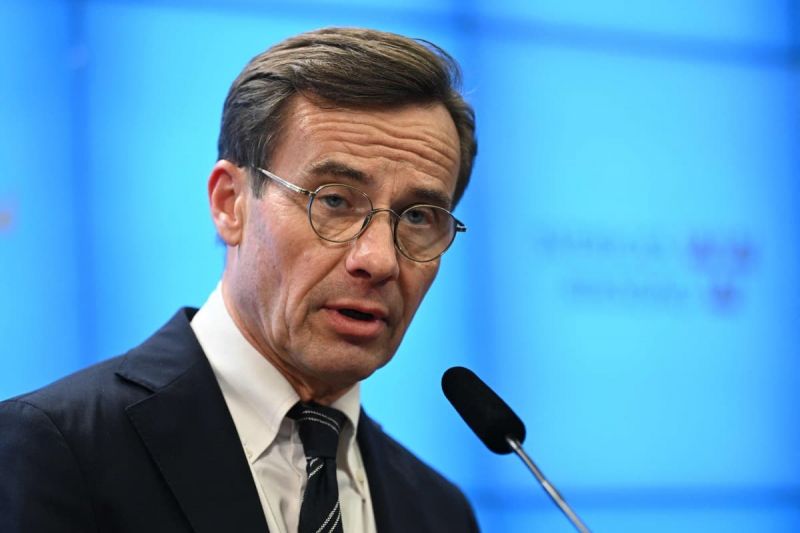 STOCKHOLM | Swedish Conservative leader Ulf Kristersson was elected Prime Minister by an outright majority in Parliament on Monday, with unprecedented and influential backing from the far-right Sweden Democrats (SD) marking a new political era for the Nordic country.

The leader of the Moderates party, architect of an unprecedented rapprochement between the traditional right and the nationalist camp in the September legislative elections, brought together 176 vote for his election as head of government, for 173 against.

After eight years on the left in power, he succeeds Social Democrat Prime Minister Magdalena Andersson, who ensured the transition after tendering her resignation after very close elections.

The vote was hailed by applause from the benches of the three right-wing parties (Moderates, Christian Democrats, Liberals) which will form the future government, and of the SD, the very influential first formation of the majority with 73 seats.

To become Prime Minister Ulf Kristersson, 58, was not to have an absolute majority against him.

“Now change is possible,” he declared at a press conference after his election, expressing his “humility in the face of the tasks ahead of us”.

Friday, after several weeks of negotiations, the leader of the Swedish right had presented a political agreement with the three other leaders of majority partner parties, including SD boss Jimmie Åkesson.

At 43, the latter was the big winner of the September 11 elections, with a record score of 20.5% of the vote and the new rank of Sweden's second party behind the outgoing Social Democrats.

In their 62-page roadmap presented on Friday, the four parties include measures to fight crime and reduce immigration, as well as a revival of nuclear energy that Sweden had reabsorbed in recent decades.< /p>

The new government, expected on Tuesday, plans, among other things, drastic cuts in Sweden's refugee reception policy, reducing the quota from 6,400 last year to 900 per year during the four years in office, as well as the possibility of “d 'deporting foreigners for misbehavior'.

With serious criminal gang problems and bloody score settling, Ulf Kristersson had made of security a keystone of his electoral program alongside promises to control energy prices disrupted by the war in Ukraine.

“Crime is a very big commitment of this government,” he said Monday, when asked about the priority of his new executive.

Never in Swedish political history has the extreme right had been part of a majority, against a backdrop of nationalist pressure in several European countries.

The program also plans to authorize searches without suspicious behavior in certain sensitive neighborhoods, heavier penalties for repeat offenders and the ability to testify anonymously in court.

As Monday's vote reflects, the right-wing “constellation” has a narrow absolute majority of 176 seats against 173 for the opposition led by Magdalena Andersson.

After an election so close that the final results had to wait three days, Ulf Kristersson had been asked a month ago to form a government.

The great challenge of the new executive was to reconcile the contradictory expectations of the small Liberal party, whose red line was the accession of the extreme right to government, and the influence of the SD, who claimed ministerial posts.

Even outside the government, the latter on Monday hailed their “absolutely decisive role” in the majority.

Both as “the largest party among the four in the government document, and as parliamentary guarantor of the government which is about to take office”, welcomed Mr. Åkesson.

The SD also won their case on the issue of unemployment benefits. The party, which describes itself as “social-conservative”, was opposed to cuts in compensation proposed by Mr Kristersson.

Due to the frailties of the new majority, the left, back in the opposition, has not given up hope of returning to power before the next elections scheduled for 2026.

The great influence of the SD in the program announced on Friday has caused tensions within the Liberals, including support is essential to Ulf Kristersson.