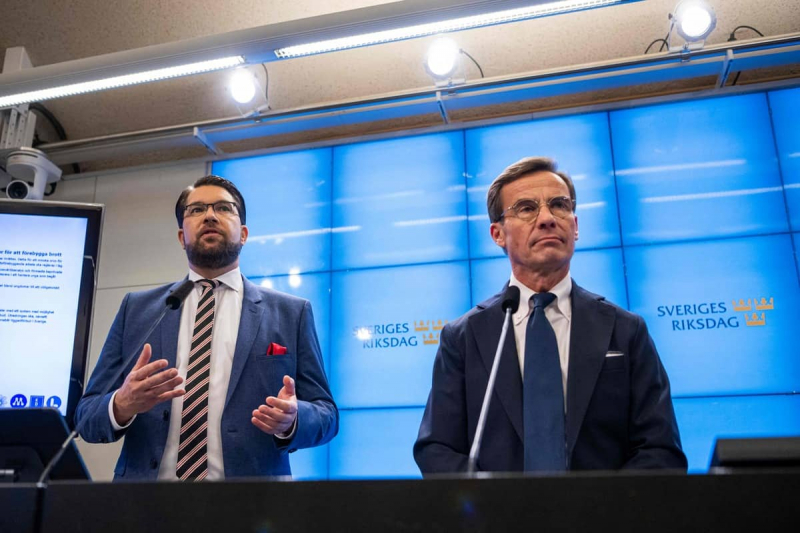 With the unprecedented support of the far right, the Swedish right announced on Friday an agreement to form a government which intends in particular to relaunch nuclear energy in the country, contrary to past policy.

“The (Conservative) Moderates, Christian Democrats and Liberals will form a government and cooperate with the (extreme right) Sweden Democrats in Parliament,” Conservative party leader Ulf Kristersson told a conference in press on Friday.

A vote to nominate Mr. Kristersson as Prime Minister will take place on Monday and the new team is expected to be installed the following day.

The partners unveiled a roadmap including measures to fight crime and reduce immigration, as well as a revival of nuclear energy from which Sweden had turned away in recent decades.

With serious problems with criminal gangs and bloody settling of scores, Ulf Kristersson had made security a key part of his election platform alongside promises to rein in war-torn energy prices in Ukraine.&nbsp ;

These market upheavals have rekindled the debate on the future of energy policy in Sweden, as in other European countries.

“New nuclear reactors will be built,” the leader of the Christian Democratic Party, Ebba Busch.

In recent years, the Scandinavian kingdom has shut down six of its 12 reactors. Those still in operation produce around 30% of the electricity used in the country.

The outgoing Social Democratic Party, in power for eight years, has traditionally opposed building new reactors, but earlier this year recognized the crucial need for the atom for years to come.

< p>The new government is also planning drastic cuts to Sweden's refugee policy, reducing the quota from 6,400 last year to 900 a year during the four-year term, as well as the possibility of “deporting refugees”. strangers for misconduct”.

“Anyone in Sweden who benefits from Swedish hospitality is expected to respect Swedish core values ​​and not harm the local population through their actions,” reads the roadmap.

The right-wing quartet also agreed not to cut unemployment benefits, a major concession from the conservatives to the far right.

For their part, the Liberals conceded to the extreme right the establishment of search zones in certain sensitive neighborhoods, heavier sentences for repeat offenders and the possibility of testifying anonymously in court.

After eight years of social democratic government, the right is back in control in Sweden after an unprecedented rapprochement with the Democrats of Sweden (SD), big winners of the September 11 elections with a record score of 20.5% of the vote.

If he does not enter the government – an option rejected by other right-wing parties – the party led for 17 years by Jimmie Åkesson is the main parliamentary force of the new majority and the second in the country, with 73 seats.&nbsp ;

All in all, the “constellation” of the right has a narrow absolute majority of 176 seats against 173 for the opposition led by the outgoing Prime Minister, the Social Democrat Magdalena Andersson.

After an election so tight that the final results had to wait three days, Ulf Kristersson was asked on September 19 to form a government by the President of the Swedish Parliament, Andreas Norlén.

Wednesday, Ulf Kristersson had been granted two more days to complete the negotiations on the right, which turned out to be more complicated than analysts thought.

The great challenge of this new government was to reconcile the expectations of the small party of Liberals, whose red line was the accession of the extreme right to government, and the influence of the Democrats of Sweden, who claimed ministerial posts.

“We would have liked to see a majority government in which we would have participated,” said Jimmie Åkesson on Friday.

“It is therefore very important for us that we have an overall agreement on political issues,” he added.

The arrival of SD in a ma The majority, even informal, in Sweden is an earthquake in the political life of the country, 12 years after entering Parliament with 5.7% of the vote.