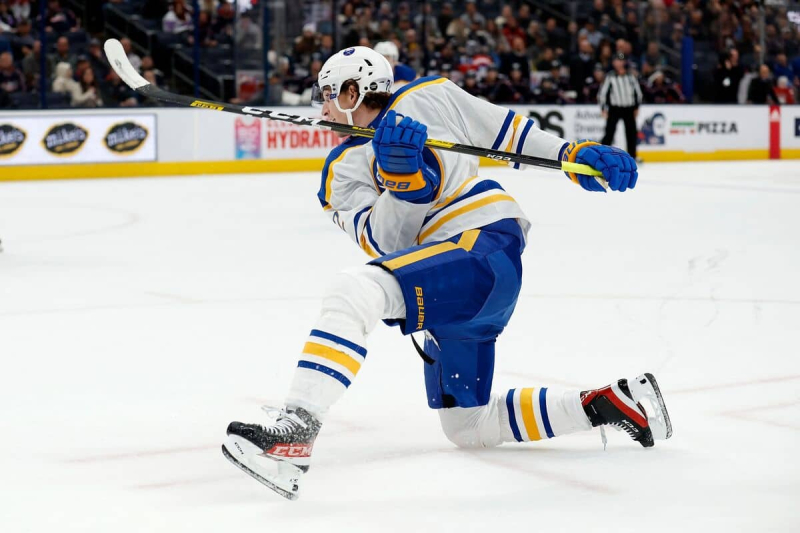 Acquired from the St. Louis Blues in the trade involving veteran Ryan O'Reilly on July 1, 2018, the 25-year-old American is having a dazzling season thanks to his 21 goals. In a 9-4 victory over the Columbus Blue Jackets, he started his night with a bang, threading the needle four times in 16:40 to start the first period; only Joe Malone (four goals in 8:45 on February 23, 1921) did better than him. The hero of the day completed his quintuplet late in the second period.

Certainly, Thompson is in excellent shape, having obtained at least one point in his last five outings. He intends to follow the same recipe and help his people reap victories.

“It was one of those nights where everything was going my way. My teammates made good plays and it was a pleasant meeting, he commented to the site NHL.com, complimenting his partners Alex Tuch and Jeff Skinner. It's really rewarding, because I've spent many years to get to this level and being rewarded like this is a great feeling. It makes you even hungrier.”

“I want to be more myself and now I know what I can do. I'm excited to live an evening like this and it's about continuing to progress by testing myself even more, “he continued.

In the opposing camp, it was obviously disarray. “In 26 years in the pros, I have never seen this. We have no answer to give against this trio. Tage Thompson knocked us out,” said head coach Brad Larsen.

An entry in the history book

The only other wears -Sabres color to have scored five goals in a game is Dave Andreychuk, who accomplished the feat on February 6, 1986. In the NHL, the last author of such a feat of arms before Thompson was Timo Meier, of the Sharks of San José; he had settled the case of the Los Angeles Kings single-handedly on January 17.

Laine was also on the ice during Thompson's exploits on Wednesday and did not was not impressed with the performance of his people. “We were bad all game and it showed on the scoreboard. It’s embarrassing to see how we played,” he lamented.