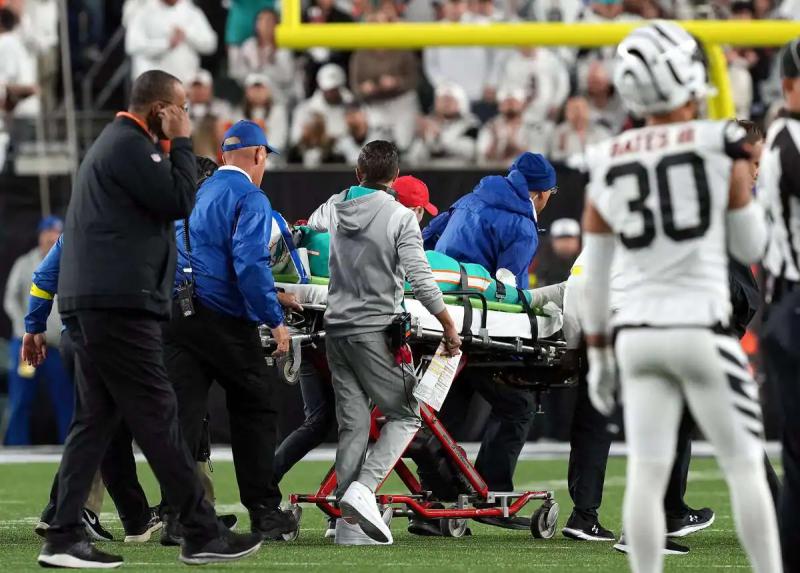 The two close incidents involving Dolphins quarterback Tua Tagovailoa bring to the fore the concussion problem, which the NFL has long tried to sweep under the rug. Despite significant improvements in the prevention and treatment of head injuries in recent years, the protocol in place must be reviewed and corrected.

A brief reminder of the facts, Tagovailoa was pushed last Sunday and when his head hit the ground hard, he staggered to his feet, struggling to stand.

After a concussion protocol evaluation by the Dolphins physician and another independent physician, he was cleared to complete the game. Afterwards, the team instead claimed a back injury that would have temporarily affected his motor skills.

Then, on Thursday evening, just four days after that first incident, Tagovailoa was again knocked to the ground and his extremities froze, in a disturbing scene. This time he was taken to the hospital.

Did he suffer an undiagnosed concussion last Sunday? Should he have been kept away as a precaution? According to the protocol in place, he did indeed have his place on the pitch. And that's where it's important to ask questions about player safety.

Like all players, Tagovailoa is a fierce competitor. This season, he knows full well that if he doesn't live up to expectations, the Dolphins will look elsewhere. He inevitably feels the pressure to play and perform.

The Dolphins, like any competitive team, want to win. Is it possible that the medical team has cut corners? Impossible to judge from a distance, far from the medial reports which are in any case above our skills. However, it is far from illegitimate to ask such questions by observing the disturbing reaction of the athlete touched on the ground.

No need to lend Machiavellian intentions to the Dolphins. Except that in cases like this, it seems obvious that the team should have the ultimate responsibility to protect a player from himself. Because the player will never do it himself. Or too rarely.

The NFL must move

It is possible that the protocol was followed in the rules of the art. This is where the holes in this protocol need to be tackled.

Diagnosing a concussion so quickly is certainly not as obvious as identifying a fracture . In such a case, any risk of misinterpretation must be avoided and the player must be forced to leave the field. Full stop.

It is clear that some affected players will ultimately not have a concussion after thoroughly passing all the required tests. So what? Isn't it better to wander around taking too many precautions than not enough?

With all that is now known about the long-term effects on the brain, there is no risk to be taken. Gray areas in the protocol must be eliminated immediately.

With the NFL being a money-printing machine, Thursday night games, after just three days off, won't go away. Can we at least ensure that players who show obvious signs of instability are not in uniform four days later?

The Players' Association is investigating the management of concussion protocol by the Dolphins. Whether they are at fault or white as snow, it is important to tighten the protocol. Not after a counter-investigation, a summit or a broad consultation, but quickly done.

And here we go again for the annual series of matches in London! Since the tradition does not change, this is the 31st time that the NFL has presented games there and never to date have both teams shown winning records. Poor Londoners! That said, the Saints offense has only had 24 points in the past two weeks and the injured Jameis Winston will be replaced by Andy Dalton. The redhead quarterback has thrown just six touchdown passes, 10 interceptions, in his last eight starts.

NOT SO BAD, THE BROWNS

If we ignore the apocalyptic last two minutes against the Jets two weeks ago, the Browns' defense is up to the task this season. It will be necessary to maintain the level against the attack of the Falcons, which surprises, but which should hit its first wall. At the Browns, Jacoby Brissett is just doing what is asked of him, which is to keep the team afloat, without multiplying the blunders. The muscular backfielder takes care of the heavy lifting.

Can the Bills bounce back with their injured cart? Can they win a close duel? Massacres, no problem! But for games decided by eight points or less, they are 0-7 since last year. Surprising! For the Ravens, Lamar Jackson leads the NFL with 10 touchdown passes, while being fifth best on the ground. The pass defense, however, was exposed by worldly Mac Jones and Joe Flacco. Josh Allen barely hides his drool slide…

The Cowboys defense has already had an NFL-high 13 quarterback sacks this season. The Commanders, for their part, conceded 15 sacks, the highest total in the league. This means that Commanders quarterback Carson Wentz is likely to find himself in a fetal position more often than in a scoring position. The Cowboys have also won nine of their last 12 meetings against the Commanders. Hard to see a different scenario.

The Lions are playing well offensively, but they will be without ace receiver Amon-Ra St. Brown. On his own, he has more receptions than the other three Lions wide receivers who have caught passes. He is a central element of the attack who will be absent, as will the dynamic running back D'Andre Swift. The Seahawks produce few sparks offensively, but it could be enough to rival Detroit's amputated offense.

It's the carnage for the Chargers, who will have to maneuver with an offensive line amputated from its best player (Rashawn Slater), without defensive end Joey Bosa and with Justin Herbert visibly in bad shape even if he plays. The rushing offense remains last in the league, with 55 rushing yards per game. The Texans could, however, open up boulevards to them, as they concede 202 rushing yards per game. It's time to get going.

This divisional rivalry features two of the NFL's best running backs. Derrick Henry sounded the wake-up call for the Titans on Sunday, but he's come up against a defense that's only given up 2.6 yards per carry so far. For their part, the Colts are betting on Jonathan Taylor, ordinary for two weeks, but still capable of wreaking havoc. The Colts need to better protect veteran quarterback Matt Ryan, but the Titans claim just seven sacks.

The Bears have completed just 23 passes in three games. To give an idea of ​​how starving it is, no team since the 1982 Patriots 40 years ago has completed so few passes in three games. The ground game works well, but it becomes urgent to diversify the attack. Especially since the Giants' defensive front has the tools to limit the damage against the run. The Giants don't have a big offense either, but Saquon Barkley is going full throttle.

Who would have thought that this duel could be captivating? The Eagles seem invincible, but the Jaguars are the surprise of this young season. Their +46 point differential is second best in the league, behind the Bills. Their head coach Doug Pederson returns to Philadelphia, where he was kicked out of town as quickly as he was revered for his Super Bowl. The Eagles rely on an excellent secondary, which concedes only 186.7 aerial yards per game. A huge test for the Jags!

THE RETURN OF ZACH WILSON

Highly anticipated news from the Jets, young quarterback Zach Wilson is back. He missed four games last season and the first three this year. He needs to see some ground with the new offensive rounds, Breece Hall and Garrett Wilson. The challenge is not easy in Pittsburgh, but the Steelers have still not won a game without TJ Watt to date (0-6). The Steelers offense remains timid and a thrilling field goal duel would not be surprising.

It's a duel between the two quarterbacks, Baker Mayfield and Kyler Murray, who were chosen first overall in the 2018 and 2019 drafts. The two are currently looking for each other and it is difficult to know who will come out of their torpor in first. Mayfield will have even more pressure on his shoulders, knowing that carrier Christian McCaffrey is banged up and won't be at the top of his game. Choosing between these two clubs right now is a bit like choosing between the plague or scurvy.

The Patriots, who don't have a fear-inspiring offense at their base, may be without quarterback Mac Jones. Career reservist Brian Hoyer would take over. In the locker room, he is an excellent leader. On the ground, it is less glorious. His last victory as a starter dates back to October 2, 2016. Since then, he has lost 12 consecutive starts. Whether it's Jones or Hoyer, the Packers defense has been playing big football for two weeks.

THE FALL OF RAIDERS

The fall of the Raiders cannot logically stretch much longer. The offensive arsenal is too impressive to fall over the edge so early in the season. The Raiders have had success against the Broncos at home, who haven't lost to them at home since 2015. 12 points awarded per game. Not the ideal remedy for the ills of the Raiders.

It's hard to forget that these two great teams last came to blows in the Super Bowl two years ago. The defensive front of the Bucs had on this occasion demolished the Chiefs' offensive line, which has since been completely remodeled. The return of receiver Mike Evans will help Tom Brady's cause, but even with Evans, Chris Godwin and Julio Jones early in the season, the offense was looking for its bearings. If the Chiefs offensive line is improved, so is their defense.

Before the conference finals last year, the Rams had lost six straight games to the 49ers this season regular. As if this team were Sean McVay's kryptonite. The Rams offensive guru has seen his team held to 20 points or less on five occasions in the last seven games against foe San Francisco. True, Jimmy Garoppolo looked terrible on his first start last Sunday, but it's the Niners' fiery defense that will make the difference.