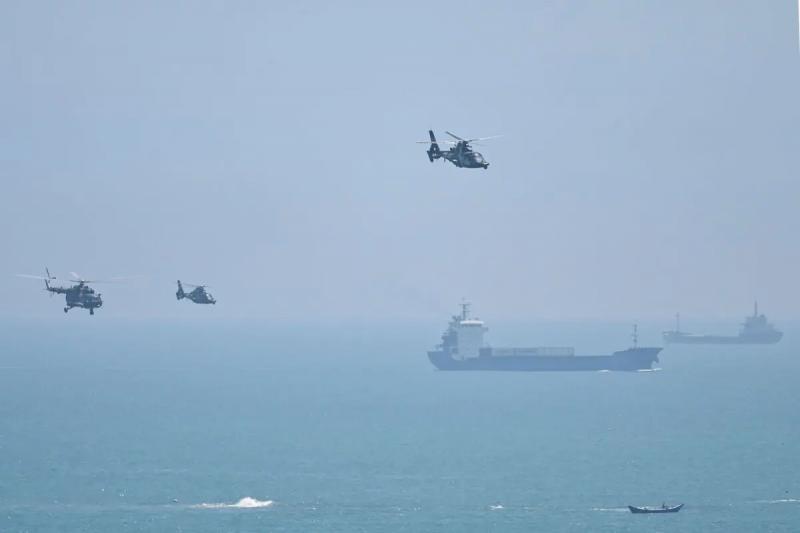 Taiwan on Saturday accused the Chinese military of faking an attack on the island and slammed the “irresponsible behavior of an autocratic regime,” with China continuing to retaliate after the number three's visit to Taipei American, Nancy Pelosi.

Relations between the United States and China deteriorated after the visit of Ms. Pelosi, Speaker of the House of Representatives, who was seen as a a “provocation” by Beijing, with the United States pledging not to have official relations with the island territory claimed by China.

In response, the Chinese military is conducting its largest-ever exercises around Taiwan. They are to last until Sunday noon and are presented as training for a “blockade” of the island.

At least 14 of them crossed the median line, he added, forcing Taipei to urgently launch patrol planes to repel the fighters.

The ministry considered that these exercises were “considered as a simulation of an attack against the main island of Taiwan”.

Drawn unilaterally by the United States during the Cold War, the median line, located at the middle of the Taiwan Strait that separates the island from mainland China, has never been recognized by Beijing.

US Secretary of State Antony Blinken said in Manila on Saturday that the United States was “determined to act responsibly” to avert a crisis after the “total disproportion”, he said, of the Chinese reaction.

China announced on Friday the “suspension” of judicial and anti-drug cooperation with the United States, but also of the bilateral dialogue on climate change, among others.

The two countries are largest greenhouse gas emitters in the world in absolute terms.

China should not “hostage” discussions on issues such as climate change, as this “does not punish the United States, but the whole world,” Blinken said.

The Chinese army published on Saturday a photo taken, according to it, from one of its military ships in the immediate vicinity of the coast of Taiwan and on which we see a Taiwanese navy building only a few hundred meters away.

This shot may be the closest to the Taiwanese coastline ever taken by mainland Chinese forces.

The Chinese military has also published the video of one of its fighter pilots showing, from its cockpit in full flight, the coast and the mountains of Taiwan.

These exercises are a warning sent to the Taiwanese president, Tsai Ing-wen, from an independence party, and to the United States, accused by Beijing of having “betrayed” their speech by strengthening their relations with the Taiwanese authorities in recent years.

China has also announced new “real-fire” maneuvers from Saturday until August 15 in a small maritime area very close to the Chinese port of Lianyungang (east), on the edge of the Yellow Sea which separates China of the Korean peninsula.

According to Chinese state television CCTV, missiles flew over Taiwan this week during exercises around the island, which would be a first.

The Mainland Affairs Council, the body which, in Taipei, manages relations with mainland China, denounced Beijing's “brutal and deplorable actions” on Saturday.

“We call on all of our democratic partners around the world to continue to support Taiwan and counter the irresponsible behavior of an autocratic regime that undermines peace with its military adventurism,” he said.

After criticism from the G7 and the United States , Antony Blinken and his Japanese and Australian counterparts issued a joint statement calling on China to halt its military exercises.

“It is impossible to tackle the climate emergency if the two main economies and the two biggest emitters do not act,” lamented Alden Meyer, an analyst at the E3G think tank, which specializes in climate change.

UN Secretary General Antonio Guterres has said that “it is impossible to solve the world's most pressing problems without effective dialogue and cooperation between the two countries”, according to his spokesperson.

The deterioration in Beijing-Washington relations could be long-lasting, experts also note.

They are “currently in a very bad state”, affirms to the AFP Bonnie Glaser, China specialist at the German Marshall Fund of the United States research center in Washington.

She cites as “particularly worrying” the suspension of cooperation agreements, such as the one on cooperation maritime military aimed precisely at preserving the escalation.

Most of the a analysts agree, however, that Beijing does not want an armed confrontation for the moment.