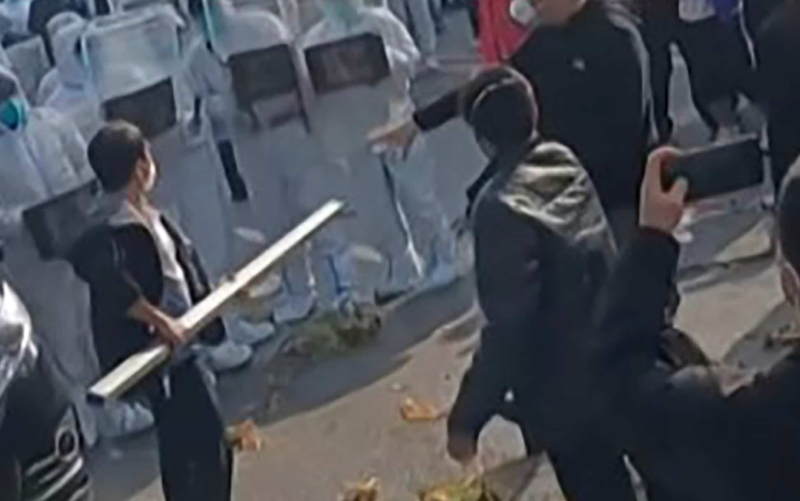 After violent employee protests this week, the world's largest iPhone factory in China is now offering a new offer to its disgruntled workers: cash to leave the premises immediately.

Anger erupted on Wednesday at this industrial site in Zhengzhou, central China. Furious at not having received the bonuses promised to stay working in the factory, which has been confined since October due to an outbreak of Covid-19, the employees faced the police.

Owned by the Taiwanese group Foxconn, the main subcontractor of the American giant Apple, the factory employs more than 200,000 people, most of whom live on site year-round, in dormitories.

Workers at the iPhone factory in Zhengzhou have had enough of zero Covid.

“Suddenly the contracts changed and everyone was unhappy,” an employee told AFP on condition of anonymity.

“As the previous incidents at Foxconn had left no one in trust, the protests broke out,” she explains.

Since the first cases of Covid-19 emerged at the factory, Foxconn has had one obsession: to keep iPhone production on schedule as the holiday season approaches.

Which prompted him to confine the site, in conditions denounced as “chaotic” by employees, many of whom fled the factory.

The company recruited urgently new employees, to whom she dangled juicy bonuses.

Compensation for the injured

But now it seems to be backtracking. Testifying Thursday on social networks, several employees say they have received bonuses of 10,000 yuan (1,340 euros) in exchange for the end of their contract and their immediate departure.

On some shared videos, in the background are seen many buses parked outside the dormitories, supposed to take employees back to their home towns.

Protest against restrictions turns very violent at the world's largest iPhone factory in China. Workers are using fire extinguishers to push back police 🚨 🚨 🚨

“Everyone has had their money and is about to leave,” according to the employee interviewed by AFP.

Foxconn, which issued an apology on Thursday, also seems to want to compensate those beaten by the police during the demonstrations, during which dozens of employees were injured.

An employee told AFP that injured colleagues had received an additional bonus of 500 yuan (70  dollars).

Contacted by AFP about this, the company did not respond immediately.

Screenshots of an official announcement from Foxconn circulated on social media on Thursday, promising employees wishing to leave 10,000 yuan to cover their salary, transportation and quarantine costs.

The announcement stated that these employees would receive 8,000 yuan first, then the remaining 2,000 when boarding the chartered buses to return home.

Video of the protests, shared with AFP and filmed by a factory worker, shows a person lying on the ground next to a man with a bloodstained jacket and a head injury.

< p>Another clip shows dozens of officers in full white protective suits chasing and beating employees with sticks, one of them being beaten to the ground, including being hit in the head.

Six million people in China's 'iPhone city' are now under Covid lockdown after clashes between police and workers furious over pay.

Fresh images of protests have been emerging Friday in Zhengzhou, home to the world's largest iPhone factoryhttps://t.co/nEdrGT5Pnv pic.twitter.com/gnnMXEJAyK

The employee who shared these videos estimated that around 20 people were injured in the clashes, some of them taken to hospital. He spoke on condition of anonymity for fear of reprisals.

According to his account to AFP, the protests broke out when the new recruits, who had signed a contract under which they would receive 3,000&nbsp ;yuan (400 euros) of bonuses for 30 days of work, suddenly saw this figure reduced to 30 yuan.

Foxconn assured Thursday that it was only a “technical error” in its payment system, promising that it would be fixed.

On the site, the unrest has now ceased, an employee told AFP. “All new recruits had to leave, now everything is normal,” he said.

A video posted Thursday afternoon on online video platform Kuaishou shows hundreds of workers waiting to be out of the dorms, dragging suitcases behind them.

“Take the money and go home,” reads the caption of this video, accompanied by a smiling emoji.