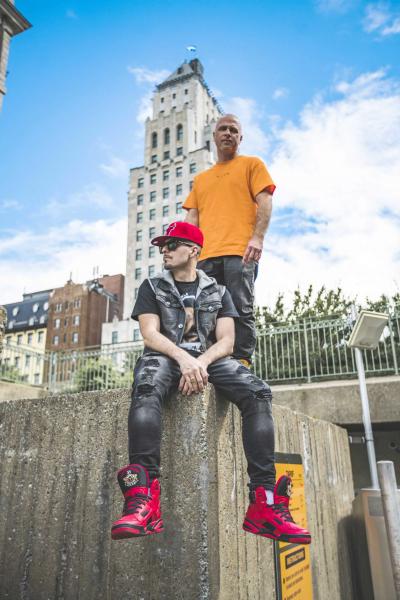 Rap has now been established long enough in Quebec to have its own nostalgia and the guys at Taktika decided it was time to give a shout out to those who pioneered the genre at us.

The title of their new album, Rap Queb Monuments, leaves no doubt about their objective to pay tribute to the rappers who made the crowds at the turn of the millennium.

On each of the ten original songs, Frédéric Auger, alias T-Mo, and Simon Valiquette, B-Ice for the fans, call on a different guest who has marked queb rap. Among others, we can hear their friends from 83, with whom they weathered the rain and the good weather on the South Shore of Quebec, Sans Pressure, Muzion, Connaisseur Ticaso and Yvon Krevé.

“We are proud of this music, of what it has become and of all the artists”, proclaims T-Mo, agreeing in the same breath that after 25 years, we can pour into nostalgia by listening to rap made in Quebec.< /p>

Also, on Rap Queb Monuments, Taktika brings back into the limelight artists who have sunk into obscurity.

“Lion G [featured on Broken Promises], who had released a super important album for Quebec, it had been 13 years since he had recorded a verse”, points out T-Mo.

One voice stands out on the album, that of their friend and founding member of 83, Jonathan Lemoine, alias Pagail, who took his own life 20 years ago, at the age of 21.

By chance, DJ Kojito, from Arshitechs du Son, found in his files a chorus and two verses that Pagail had recorded before his death. He gave them to Taktika who made them the last track on the disc, At the head of the world.

“You listen to the lyrics and you see that he was someone mature for his age. Sounds great, and we're 20 years later. This struck me. Obviously, we also have the feeling that he is there with us. It was emotional.”

Boom bap to the fullest

To wrap this tribute project musically, the duo relied heavily on boom bap sounds , a branch of hip-hop that had its heyday in the 1980s and 1990s, as they did on the 83 album which was released during the pandemic.

“We we realized, reading the comments when the 83 album was released, that many people do not find themselves in today's rap and that they wanted to hear rap as it was produced at the 'era.'