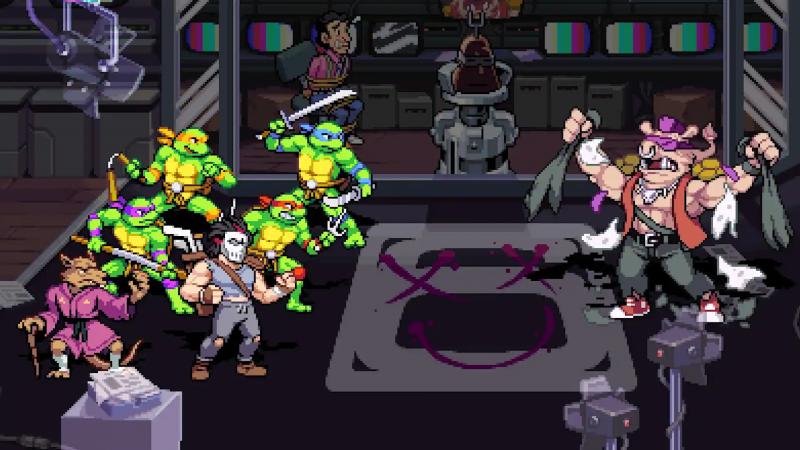 Teenage Mutant Ninja Turtles: Shredder's Revenge is more than just a video game. It's a love letter to the heyday of the arcades and to the heroes of our childhood.

Just one game of TMNT: Shredder's Revenge started than 'we feel like we've found the corner arcade where we spent our afternoons – and our weekly allowances – with a group of friends. The feeling is familiar, comforting, but above all very exhilarating.

In short, the scent of nostalgia is strong. Because here we reconnect with Leonardo, Donatello, Michelangelo and Raphaël in an unprecedented adventure borrowing the codes and aesthetics of the 1980s; rhythmic electronic music, two-dimensional and linear path, colorful and pixelated graphics… it's all there, but embellished with a touch of modernity.

True to the times

Our shelled heroes are this time back on the streets of New York to thwart the plans of their sworn enemy, Shredder. To do so, they will have to repel the attacks of hordes of Foot Clan minions and minions over the course of 13 distinct chapters.

But our turtles are not alone; April O'Neal, Splinter and Casey Jones also have their place in the arena, completing the stable of seven characters to choose from.

Admittedly, the process becomes repetitive, the fights ending up resembling each other over the chapters. But that is part of the conventions of the time, even the very concept of arcade games. We therefore easily forgive it, especially with a generous offer of characters to choose from whose individual skills and characteristics come to vary the experience.

And the best part of all this? We can join forces with five additional players to supplant enemy armies online or face Krang, Bebop and other Rocksteady. Prefer to play locally? Three friends can join you in front of your television to embody these heroes locally.

The shell of our dear Ninja Turtles may therefore have been tarnished and softened by their last adventures on the big screen, it finally regains its letters of nobility thanks to the Montreal studio Tribute Games.

We can already hear the fans shouting “Cowabunga!”

Available on Nintendo Switch, < strong>PS4, Xbox One and PC.