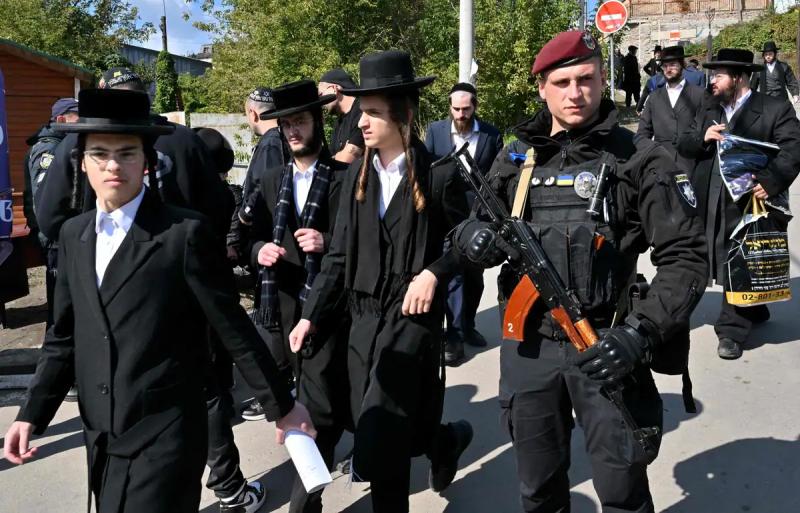 Tens of thousands of Hasidic Jews have gathered in the Ukrainian city of Uman for their annual pilgrimage, despite calls to desist because of the ongoing conflict, authorities said Sunday.

Every year, Hasidic pilgrims come to Uman from all over the world for the Jewish New Year, Rosh Hashanah, to the tomb of Rabbi Nahman of Breslov (1772-1810), one of the main figures of the Hasidism, an orthodox branch of Judaism.

Even though Uman, a city in central Ukraine, is relatively far from the frontlines where the Ukrainian and Russian armies clash, Ukrainian and Israeli authorities had urged pilgrims not to come for the planned Sunday celebrations See you Tuesday this year.

Pilgrims often quote a religious text by Rabbi Nachman in which he promises that he will “save from hell” those who come to visit his tomb on Rosh Hashana.

“There have been sirens, but coming from Israel we are used to sirens, we know what to do. We feel pretty safe,” said Mr. Allen, a doctor from Yad Binyamin.

However, the journey is not without risk. Located about 200 kilometers south of kyiv, Uman was hit by Russian strikes in the first weeks of the war. Last month, a man was fatally injured by shrapnel from a Russian missile shot down by anti-aircraft defence.

Police put in places a vast cordon to control access to the tomb, verifying identities and allowing only residents and worshipers to pass.

During Rosh Hashana, the sale of alcohol, fireworks, firecrackers and dummy weapons was banned and a curfew declared from 11 p.m. to 5 a.m. local time, according to a spokeswoman for the regional police, Zoïa Vovk.

Despite the restrictions, the shrine housing the tomb was buzzing with commotion on Sunday. Pilgrims – only men and boys – were praying, leaning against the white walls and columns inside the building.

At the outside the temple echoed the simultaneous prayers of hundreds of faithful.

A few meters away, Yaniv Vakhnin, another pilgrim, explains to AFP that war is not scary when Rabbi Nachman protects you .

Rabbi Nachman says that even if there is war in a country, whoever listens to him will not be affected by the war,” said the 48-year-old from Safed in northern Israel.

“So we are fully protected” and “we feel very safe and very happy to be together,” said the devotee who took 30 hours to get to Uman: first a flight to neighboring Romania, then a 15-hour bus ride to the destination.

Firm in his faith, he did not hesitate to come to Ukraine with his two children, leaving five others at home.

“We let's pray to God. And I hope Ukraine won't get hurt and will win the war because Rabbi Nachman is buried here, so Ukraine is protected,” Vakhnin said.

According to the United Jewish Community from Ukraine, a faith-based NGO, more than 23,000 Hasidic Jews have already arrived in Uman, hit repeatedly by Russia since its February 24 invasion of Ukraine.

The police preferred not to give the number of pilgrims until the end of the festivities, fearing a Russian attack. “The only thing I can say is tens of thousands” of pilgrims who have already arrived, said Zoya Vovk.

Ukrainian President Volodymyr Zelensky, himself of Jewish descent, on Sunday congratulated “all Jews in the world on the holiday.”