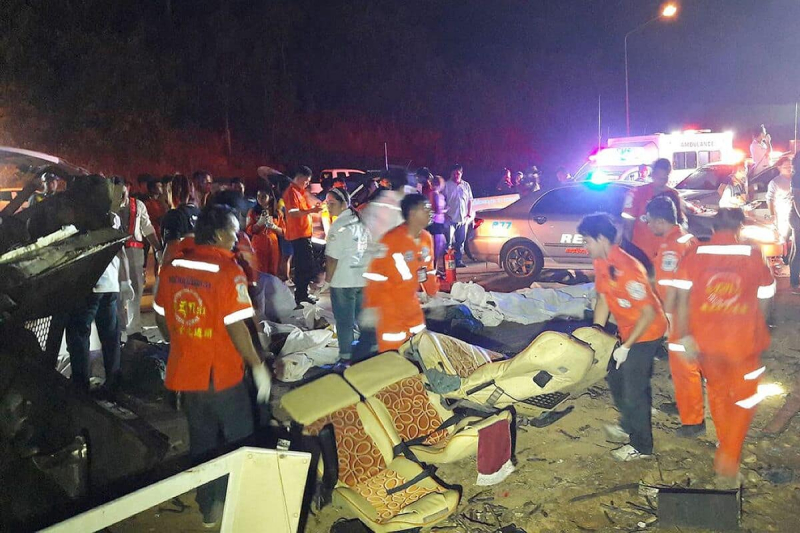 The fire of a van involved in a traffic accident killed eleven people, including two children, in the Thai province of Nakhon Ratchasima (center), said Monday a representative of the police.

The incident occurred on Saturday evening on a fast lane when the vehicle, carrying twelve people from Amnat Charoen (east) to Bangkok, went off the road, crashing into the central reservation.

A young man escaped before the fire broke out, but not the others, trapped in the passenger compartment, “who died in the fire”, police colonel Yingyos Poldej told AFP .

Thanachit Kingkaew, the sole survivor, was sleeping when a scream woke him up at the time of the crash, he described to Thai state broadcaster PBS.

< p>“I smashed the windows with my foot and managed to escape through a narrow hole,” the 20-year-old student explained.

“Shortly after that, the van exploded,” he said.

The fire engulfed the vehicle in less than 30 seconds, according to a rescue worker at the scene, to Thai PBS.

According to the first elements collected by the police, the fire was due to gasoline, while the van also included a tank for natural gas, which did not leak.

An investigation is underway course to understand why the van ended up in the central reservation, said Yingyos.

This incident, which occurs during the Lunar New Year holidays, is a reminder of the danger of traffic in Thailand, known for its many accidents.

According to the latest data from the World Health Organization (WHO), dating from 2019, the kingdom has a mortality rate due to traffic accidents twice as high as the average in South Asia Southeast.