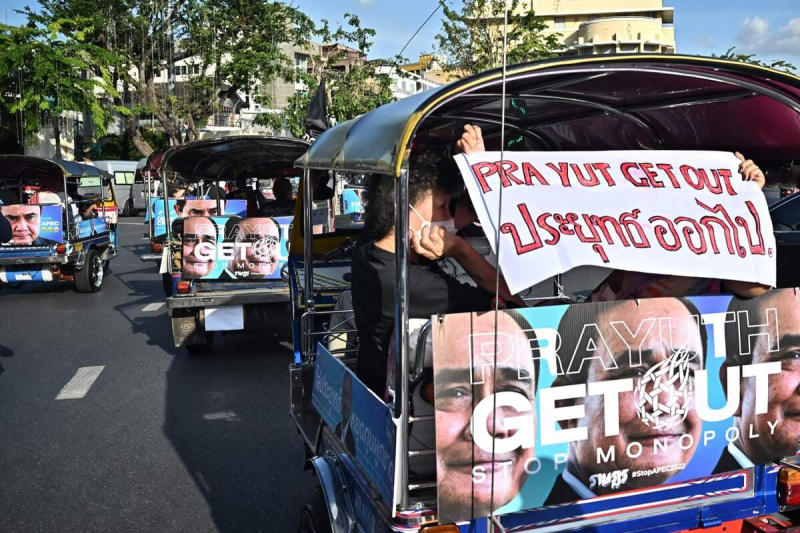 Scuffles broke out on the sidelines of the Asia-Pacific summit in Bangkok, leading to the arrest of 25 protesters opposing Thai Prime Minister Prayut Chan-O-Cha, police said on Friday .

A protest group planned to join on foot, in a walk of about eight kilometers, the convention center where the leaders of the Economic Cooperation for Asia-Pacific (Apec) have met since Friday.

Clashes occurred shortly after their departure, near the monument for Democracy, in the center of Bangkok.

For nearly half an hour, about fifty demonstrators threw stones, bottles and shrapnel glass on riot police, who responded with smoke bombs and rubber bullets.

“We don't 'we were not able to control the situation, which is why the use of force was required,' he justified.

The scuffles left ten lightly injured, according to the hospital The capital's Erawan.

Nearly 28,000 police officers are mobilized for the event which lasts until Saturday and brings together several heads of state, such as Chinese President Xi Jinping and his French counterpart Emmanuel Macron.

The unpopular general Prayut Chan-O-Cha, who became prime minister in the 2014 coup, has yet to announce whether he will stand for the next scheduled election in 2023. Massive pro-democracy demonstrations in 2020 had already called for his departure.