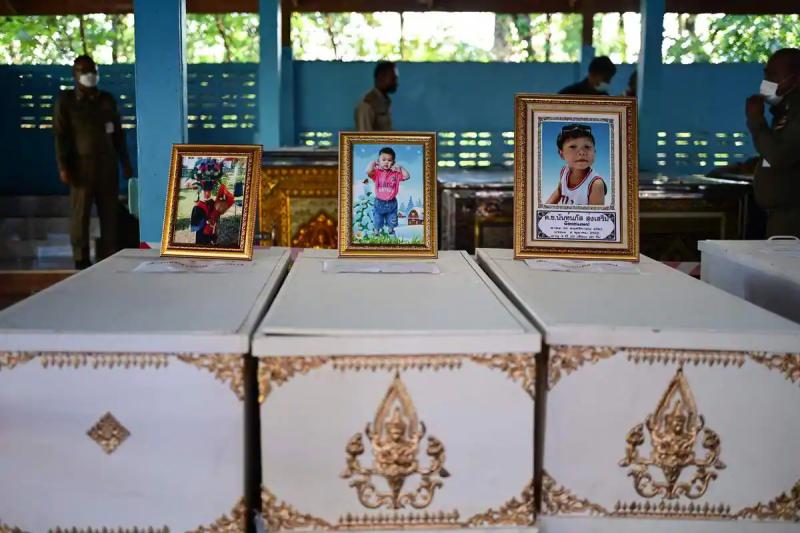 “Incomprehensible”: inconsolable, families mourned their missing on Friday, the day after the massacre which left 37 dead, mainly children from a nursery, in a rural province in northern Thailand where the king Maha Vajiralongkorn goes in the evening.

King Rama X, considered a quasi-deity in the country, is expected in a hospital in Nong Bua Lamphu at the bedside of the wounded, shortly after Prime Minister Prayut Chan-O-Cha.

Silence enveloped the surroundings of the crèche where one of the worst killings known to the kingdom took place, sometimes interrupted by the sobs of families and the agitation of representatives of the authorities in white suits and black armbands.

A red carpet was rolled out in the morning to allow them to gather and lay flowers. It was then removed, not without having provoked angry reactions from Internet users in Thailand, in front of this ceremony moved to a crime scene.

Near the entrance, where white roses recall the tragedy, a bereaved mother clings to the blanket of her missing child and holds her half-filled milk bottle in her hand.

Some children were only two years old, like little Kamram, whose 19-year-old mother Panita is inconsolable. “It's incomprehensible,” she breathes, her 11-month-old daughter in her arms.

“I was very shocked and scared. I couldn't sleep, I didn't think it would be my two grandsons,” aged three, said their grandmother Buarai Tanontong, 51, clutching her daughter's shoulder.

< p>“I still can't accept what happened. The assailant, what is your heart made of?” wrote Seksan Srirach, the husband of a pregnant teacher with their child, killed at the nursery, in a post on Facebook.

Des police were also interviewing bereaved families and witnesses near the crèche.

A former police officer armed with a 9mm pistol and a long knife killed 36 people on Thursday, including 24 children — — 21 boys and 3 girls — according to the new tally from the Ministry of Health, police and provincial authorities , lower than that announced by the national police on Thursday (37).

His murderous journey began in a nursery in the district of Na Klang, around 12:30 p.m. (6:30 GMT). He then took to the road and tried to run over passers-by, until he got to his home, “not far” from the nursery, according to the police.

He then killed his wife and their little boy, before killing himself, in the early afternoon before 3 p.m., about two hours after the start of the killing.

During the night, the small white and purple coffins were taken to a hospital morgue in Udon Thani, in the neighboring province.

After this “horrible” massacre, Prayut Chan-O-Cha ordered the opening of an investigation and asked the chief of police to “expedite the investigations”.

The first elements provided paint the portrait of a 34-year-old assailant, plagued by drug addiction problems which caused him to lose his position in the police last June.

“ He was expected to stand trial on Friday on his drug problem,” national police chief Damrongsak Kittiprapat said Thursday.

“Everyone knew the shooter. He was a nice guy, but later we all knew he was taking meth,” said Kamjad Pra-intr, a resident who came to support families.

It's not the first time that Thailand is bereaved by a massacre of this magnitude. In February 2020, a shooting perpetrated by an army officer left 29 dead, notably in a shopping center in Nakhon Ratchasima (east).

< p>The shooter, a 31-year-old chief warrant officer, was shot dead by the police after his murderous spree lasting almost 17 hours. He had acted out after an argument with a superior.

Na Klang's drama is a reminder of the extent of drug problems in the kingdom, where wholesale and sale prices have fallen at historically low levels due to abundant supply, according to data released in 2021 by the UN.

The rural province of Nong Bua Lamphu lies near the “Golden Triangle “, on the borders of Burma and Laos, considered for decades as the central point of narcotics production in the region.