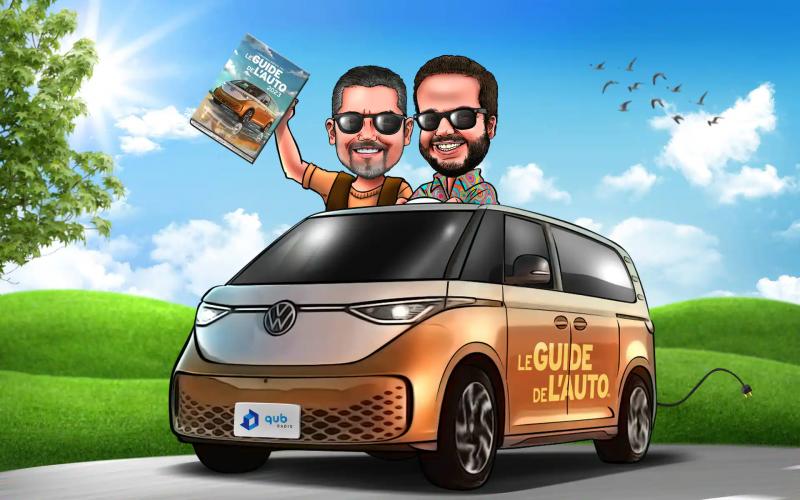 After many months of hard work, the Car Guide team is very proud to present the 2023 edition of its annual publication.

On the occasion of the arrival in stores of this book awaited by car enthusiasts, Antoine Joubert and Germain Goyer presented the highlights as part of the program Le Guide de l'auto on QUB Radio.

The cover page of a book is usually what you see first. After a lively discussion, the editorial team decided to place the Volkswagen ID there. buzz. Reminiscent of the Microbus of yesteryear, it is nevertheless very much of its time since it is entitled to an entirely electric motorization.

“This year, to my eyes, it was obvious to find the Volkswagen ID. Buzz on the cover because, to me, this is the most revolutionary, striking, iconic and anticipated product. We rejoin the past as much as the future since it is electric,” comments Germain Goyer.

“I have a bit of a feeling, funny as it sounds, that this vehicle will have the same role as the Chevrolet Colorado in 2015, which is to relaunch a segment that is about to go out,” adds Antoine Joubert given that the minivan niche is in free fall.

Comparative matches are definitely part of the strengths of this annual book and the 2023 edition is no exception. Three journalists split up the task of organizing and writing one each.

In winter, Germain Goyer confronted the new electric models of the Hyundai Ioniq 5 and Kia EV6 with the big winner of the electric match in the Guide de l'auto 2022, the Ford Mustang Mach-E.

As for Antoine Joubert, he compared the new sporty compact sedans on the track and on the road: Honda Civic Si, Hyundai Elantra N, Subaru WRX and Volkswagen Jetta GLI.

Editor-in-chief of the 2023 Car Guide, Julien Amado traveled to Vietnam to discover VinFast, a car manufacturer that will try to break into the North American market. In this file, he looks back on the history of the company, his first impressions of the VF 8 electric SUV as well as a visit to the factory.

In a special file, he also made a point of highlighting the 40th anniversary of the Rabbit and Golf GTI by comparing the 1983 and 2023 models.

Like every year, there is a section dedicated to concept vehicles work by Alain Morin.

Of course, there are also more than 350 models evaluated as well as the best buys in 27 categories according to our experts.

News from the week

During this program, it was also discussed the electric shift that Acura will take as well as the improvement of the Duramax engine of the Chevrolet Silverado.

The two animators give their impressions of the recently tested 2022 Land Rover Defender and Toyota RAV4 Prime.