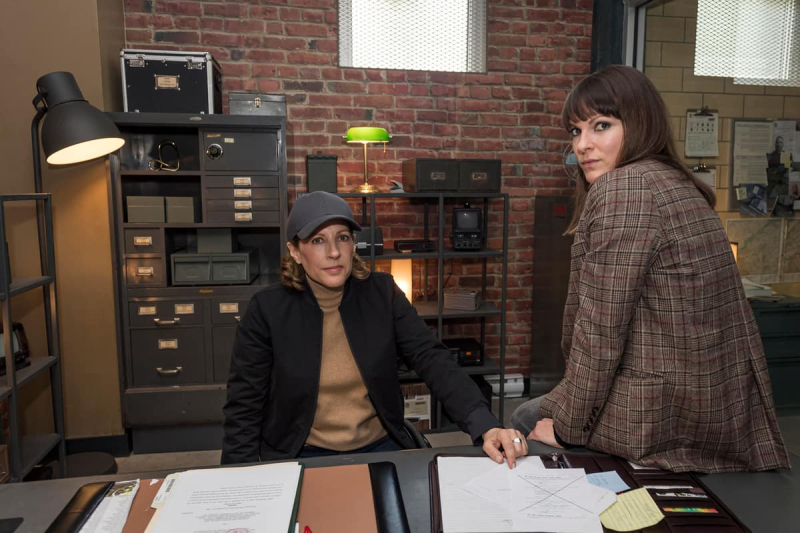 Members of the Investigations Unit look into the attack on Maryse (Sophie Lorain) which occurred a few weeks earlier when we find them at the start of the second season of “Portrait-robot”, whose the 10 episodes are posted on Club illico this Thursday.

We remember that the director was attacked from behind as she got out of her vehicle. We will know who attacked her and for what reason, Eve (Rachel Graton), Bernard (Rémy Girard), Anto (Adrien Belugou) and Élektra (Kathleen Fortin) chasing the culprit. With her very own technique for creating a composite portrait, Ève (Rachel Graton) helps Maryse – who has suffered psychological damage – to identify a suspect. But conducting an investigation when she is both victim and witness puts Maryse in a delicate position.

For her part, Eve returns from a break, she who was upset when she learned at the end of the first season that her son William, who had been missing for six years, was alive and well. Very early on, we discover that Eve's ex, James (Brett Donahue), snatched her baby doll after she had put it in danger on the roof of her loft. We see all this from the first minutes, so no spoilers here.

Ève is doing better and even has an alarm on her cell phone to remind her to take her medication, she who is bipolar type 2, with a strong tendency to anxiety disorders. “Everything came back to her and she realized it was time to take charge. She pays more attention to herself, but she is not ready to see her son again right away,” said the author of the series, André Gulluni, in an interview with the QMI Agency.

Five major investigations follow one another this season. After the one concerning Maryse, the Unit looks at the case of a young woman (Ludivine Reding) found in the middle of the street in a hospital gown. This plot also features the excellent Pascale Bussières. Other actors will be there for the duration of an investigation, including Jean-Michel Anctil, Véronique Bannon, Juliette Gosselin, David La Haye, Jean L'Italien, Geneviève Néron and Marc-St-Martin.

“My pleasure is to find slightly twisted ideas”, underlined the author, who above all wishes to “surprise” the viewers.

As for Bernard, who still operates with methods from another era (for our greatest pleasure), he regularly visits his shrink (Diane Jules), but the therapy is not progressing as quickly as he would like. The almost septuagenarian has never declared his love to a woman, but he finds himself in a love triangle, he who has a crush on both Maryse and Elektra…

“He has affection for both. He deeply loves Maryse, because she is the one who knows him best, but he appreciates the little “wild” side of Elektra, “said Mr. Gulluni. The cybercrime expert also takes on more importance in the second season, as does Delphine (Carla Turcotte), Maryse's daughter, who wonders if she also has Stonemaier syndrome, which makes the bones of those affected are extremely fragile.

Anto, for his part, is in love with his first boyfriend, post office janitor Simon (Alexandre Goyette), who has a troubled past. The young crime scene technician is also haunted by having shot Jon-E-Zee (Émile Schneider) to save the lives of his colleagues.

The camera of director Alexis Durand-Brault – also producer of the series with his wife Sophie Lorain via their ALSO box – is as inventive as ever, showcasing the extraordinary artistic direction and unique photography of the work, which is now available in the United States, England, Scandinavia, India, Brazil and Australia.

André Gulluni has completed writing the third season of “Portrait-robot” before Christmas. He is also eager to see the six-episode miniseries “Rematch”, which he developed with Yan England. The latter shot this psychological thriller in Montreal and Budapest for the Franco-German channel ARTE. The story is that of the duel between the world chess champion Garry Kasparov and the IBM supercomputer Deep Blue, in 1997.