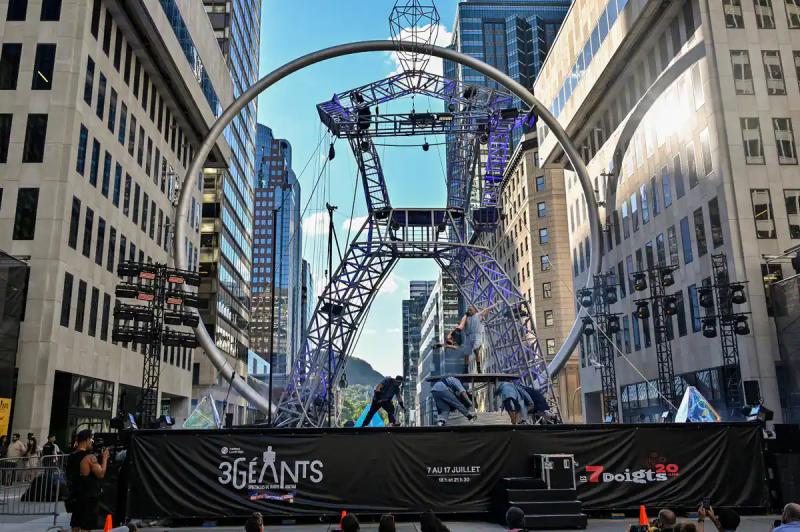 The 7 Fingers set the bar high with their energetic and electrifying show presented on the Place Ville Marie esplanade, Thursday evening, as part of the free “3Géants” event.

The 52-foot-tall, 30-foot-wide structure at the foot of which acrobats from the Montreal company perform as part of the Montreal Completely Circus festival has the new ring and Mount Royal in the background. We've seen worse decor.

Each acrobatic arch in the shape of a giant – there are two others of the same size at Parc Vinet, in the South-West, and at Jardins Gamelin, next to the ski resort. Berri-UQAM metro – will be animated evening after evening, until July 17, at 6 p.m. and 9:30 p.m.

The Machine de cirque troupe, from Quebec, entertains the curious at Parc Vinet, while Cirque Éloize, from Montreal, takes care of the giant installed at the Jardins Gamelin.

At PVM, a show that Agence QMI saw Thursday in the early evening, The 7 Fingers used the giant less than we would have thought, but the ten athletes on stage were not lacking in confidence and dazzled the crowd. There were balancing acts, jumps, rollerblading, in short, the spectators were not disappointed in these 30 well-packed minutes.

At times, the wind corridors added a coefficient of difficulty through this fauna of skyscrapers.

You have to see the 9:30 p.m. number at PVM – and at the other two places, no doubt – to take full advantage of the play of light, since the more the show evolves, the more the giant lights up to the rhythm of the music. Triangular prisms that have been used throughout the performance, like poetic touches, are brought together at the end of the course and hoisted into the scrap metal giant's chest, causing it to beat to give it life. And a soul!

People, we feel, are happy to come together – despite a seventh wave of COVID-19 taking hold – and the magic happens even more outdoors, it seems.

The fun now , is to attend all three shows by July 17. To avoid work, there is always public transport, cycling or BIXI.

To build each giant, it took the teams five months of work. Among all the challenges, it took almost 4,000 hours in the shop, over eight weeks, to complete the fabrication, including the assembly jigs, welding and adjustments. Another three weeks were needed for the painting stage. Nine 53-foot trucks were requisitioned to deliver each structure from the Scène Éthique workshop.

The 3Géants event is part of the city's tourism and artistic recovery strategy, which has been tested over the past two summers due to the endless pandemic. Under the impetus of Montreal completely circus and Tohu, 3Géants has for the first time allowed the three circus companies to collaborate closely in the implementation of the project, bringing together the living forces of an industry that is the pride of Quebec. . Each company ultimately signs its own creation.

Montréal completely circus is in full swing until July 17. The program is available online.