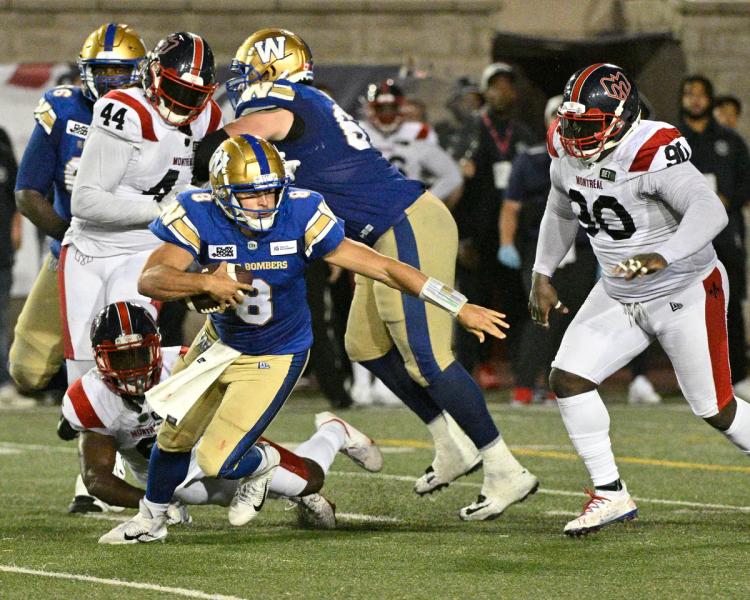 MONTREAL | Ineffective on offense for most of the game, the Alouettes were defeated 35-20 by the Winnipeg Blue Bombers on Thursday night at Percival-Molson Stadium.

The offensive unit scored just one touchdown against the only undefeated team in the Canadian League in 2022 when quarterback Trevor Harris was behind center, the vast majority of the evening. It was already the fifth time that the Alouettes (2-6) have been limited to two offensive majors or less in a game, and this, in eight outings so far this season.

The Sparrows attack, however, benefited from a multitude of golden opportunities against the Blue Bombers (9-0), courtesy of its defense. This was particularly the case on the first sequence of the match, when Wes Sutton made an interception and gave the ball back to his team at the visitors' 27th line. The “Als”, however, had to settle for a placement.

The defense continued its excellent work during most of the confrontation, amassing three other turnovers in the process. Coordinator Noel Thorpe's unit still allowed the Bombers four majors in the last three quarters.

The second half of the game started like the first, with a field goal from David Côté. The Quebecer placed the ball between the posts from a distance of 49 yards, thus equaling his personal best.

Philpot and Dequoy stand out

The Blue Bombers, however, returned to the end zone on the following sequence. This is when Tyson Philpot came into his own. The freshman returned the kickoff 60 yards. Three plays later, the wide receiver caught a throw from Harris and scored the lone “Als” touchdown. By virtue of a two-point conversion, the crowd favorites tied the game in the third quarter.

Marc-Antoine Dequoy then demonstrated the extent of his talent by making a magnificent interception deep in the his area. The table was once again set for the Alouettes' offense, which again failed miserably.

What had to happen happened and the two-time defending Gray Cup champions outrageously dominated the last ten minutes to escape with victory. Harris was also the victim of two thefts during those last fateful minutes. It was Dominique Davis who ended the evening at quarterback, which allowed the locals to score a touchdown of no real importance in the last minute of play.

The Alouettes will have seven days to try to make adjustments and look better against these same Blue Bombers, since the two teams will meet next Thursday in Winnipeg.