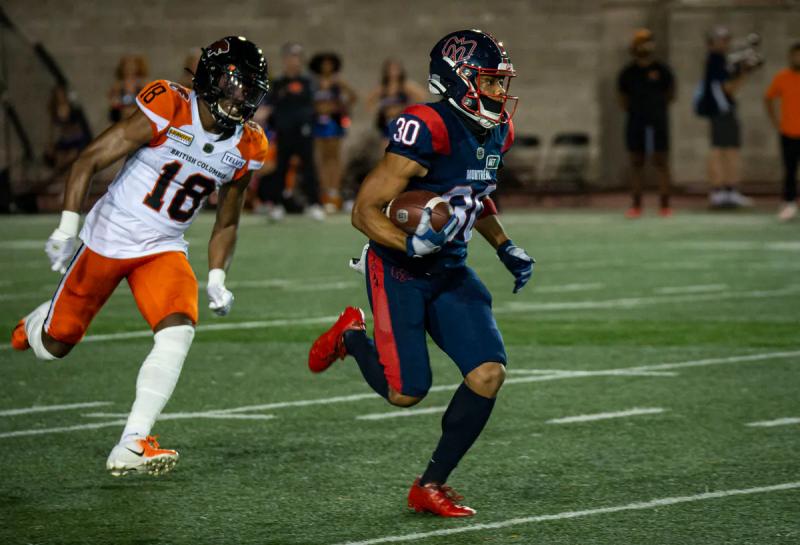 MONTREAL – It was a good night for the Alouettes at Percival-Molson Stadium, as they returned to winning ways by beating the BC Lions 31-10 on Friday.&nbsp ;

The Sparrows' performance today contrasted with their last outing, a setback where the lack of effort was glaring against the Ottawa Redblacks.

“I felt great pride on the part of our players and our coaches, who worked so hard this week to establish a game plan that was executed almost to the letter. We have seen the results”, expressed Danny Maciocia after the meeting.

Against the Lions, the “Als were particularly effective defensively. Coordinator Noel Thorpe's unit got up in key moments and helped their own win the turnover battle by winning the ball back four times. Recently acquired from the Edmonton Elks, defensive back Nafees Lyon scored a touchdown after an interception and thus ended the Lions' hopes of a comeback. Defensive lineman Mustafa Johnson also stood out with two sacks and a safety touchdown.

“We presented ourselves mentally and physically […] We imposed ourselves,” analyzed the general manager and interim head coach of the Alouettes about his defense.

Not satisfied on offense

For its part, the Alouettes' offense crossed the goal line twice. Eugene Lewis again demonstrated the extent of his talent and caught the only touchdown pass from quarterback Trevor Harris.

The 36-year-old pivot completed 69.6% of his stints, but was still the victim of theft. It was his fourth interception in his last three games.

“Our defense was dominant, but to be honest, I'm not happy with our offense in the second half,” revealed Maciocia.

“We have to keep pushing the accelerator,” Harris said. Our defense managed to do it. I think we can be one of the best offenses in our league, but we still have things to correct.”

Not easy for Vernon Adams Jr

Used for three short streaks by the Lions, quarterback Vernon Adams Jr. has done little to help the cause of his new roster. Sent into the fray at the end of the first quarter, the one who was obtained from the Alouettes in return for a first-round pick last week succeeded in one of the three passes he attempted, for 17 yards.

In his second appearance on the field, Adams Jr. saw Marc-Antoine Dequoy sacrifice himself and force a fumble. The Quebec marauder also recovered a loose ball in the fourth quarter.

“The coach said it last week, we are our worst enemies on the field and we are capable of fighting ourselves. Today [Friday] we played at our level and we showed what we are capable of,” said Dequoy.

Special teams true to themselves

If there is one constant for the Alouettes in 2022, it is the performance of the special teams. Once again, coach Byron Archambault's unit was dominant. Chandler Worthy notably made a 51-yard punt return and Zach Lindley blocked a punt. The latter also obtained an important tackle on a punt fake on third down. Kicker David Côté made all three field goal attempts.

“The guys worked so hard this week,” said Archambault. A great example of that is on the fake kick. We knew they [the Lions] were going to try something like that. We have analyzed all the situations where the opposing coach has used this strategy since 2017. When it happened, the guys were ready and they reacted perfectly.”

The Alouettes will benefit from a week off in the coming days and will return to action on Friday, September 23. For the occasion, the Hamilton Tiger-Cats will be passing through the Quebec metropolis.