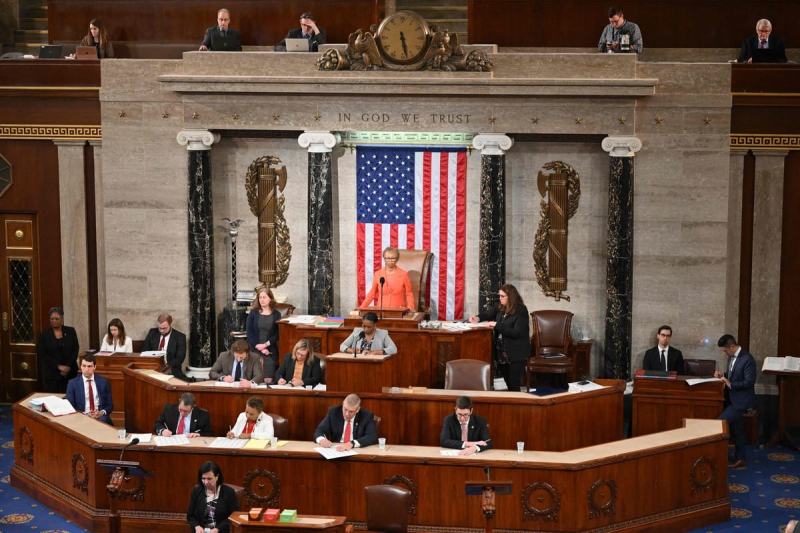 Two years after the assault on the Capitol, the American Congress finds itself plunged into another type of chaos on Friday, completely paralyzed by the revolt of some twenty elected Trumpists, who are blocking the election of a president.

Republican Kevin McCarthy, favorite to replace Nancy Pelosi in this position, was still clinging to his candidacy at the start of a fourth day of negotiations. The debates must resume at 12 p.m. in the hemicycle of the House of Representatives.

The elected representative from California is dependent on the goodwill of members of the most conservative fringe of his party, who are taking advantage of the very thin Republican majority won in the midterm elections in November to set their conditions.

The opportunity for the Democrats to denounce the stranglehold of the faithful of Donald Trump – many of whom still refuse to recognize his defeat in 2020 – on the Republican Party, two years after the attack led by his supporters against the seat of Congress .

“The chaos that reigns in the House of Representatives n This is just another illustration of how an extreme fringe (…) prevents them from governing, ”assured the leader of the Democrats in the Senate, Chuck Schumer.

The anniversary of the Capitol assault “should serve as a signal to the Republican Party to reject the Trumpism that has led it from failure to failure,” he said in a statement.

This second anniversary was marked by a minute of silence on the steps of the United States Congress.

Kevin McCarthy extended his hand to the free spirits blocking his election, offering them sizeable concessions in behind-the-scenes negotiations.

The group, which says it has no confidence in itself, still refused to toe the line on Friday, still leaving the House of Representatives without a president after an 11-round election – a scenario unheard of in 160 years.

This blocking has very concrete repercussions: without a “speaker”, elected officials cannot take an oath or therefore vote on a bill. But the 434 members of the House of Representatives, the scene of this singular spectacle, will continue to vote until a president is elected.

“We're going to make progress, we're going to surprise you,” Kevin McCarthy promised as he entered Congress on Friday morning.

Third most important figure in American politics after the president and the vice -president, the “speaker” needs a majority of 218 votes to be elected. Mr. McCarthy currently capped at 201.

But how long will his candidacy remain viable?

A member of the Republican staff for more than ten years, the elected official does not currently have a credible competitor. Only the name of group leader Steve Scalise is circulating as a possible alternative, without his chances seeming serious.

What is usually only a matter of a few hours could stretch over several weeks: in 1856, the elected members of Congress had only agreed after two months and 133 turns.

The annoyance was palpable in the members of the “Grand Old Party”, who largely supported the candidacy by Kevin McCarthy, giving rise to very lively debates in the hemicycle. The Republican leadership also knows it can't afford to go overboard and alienate moderate Republicans.

In the Democratic ranks, where elected officials all rise en bloc with each vote, as if to accentuate the Republican divisions a little more, we take care of ourselves as best we can. Joe Biden's party may show unity around its leader Hakeem Jeffries, but neither does the camp have enough votes to end this paralysis.