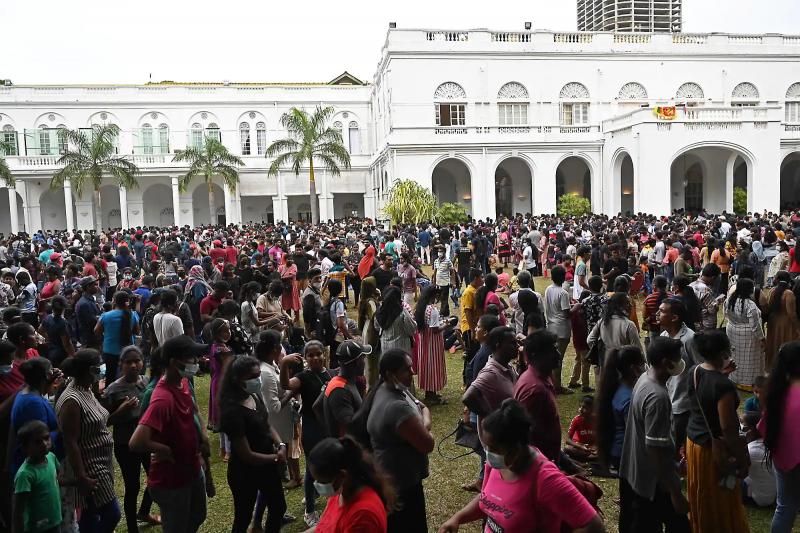 It's hard to find a corner of the world further from us: between Montreal and Colombo, the capital of Sri Lanka, there are more than 13,600 kilometres, a third of the circumference of the Earth. It gives you an idea. However, what is happening there deserves our attention.

A summary of the last ten days in forty words: Sri Lanka is experiencing the worst economic crisis in its history; inflation and shortages suffocate the rebellious population; the president's residence is stormed; the protesters bathe in his swimming pool and sleep in his bed.

This Sri Lankan crisis could also be transposed into a mathematical formula: disheveled debt, added to a devastating pandemic for the tourist industry, multiplied by the war in Ukraine which is driving up the cost of energy and food.

Result: a middle class that becomes impoverished in a few months and rebels; a president running away like a coward… but nothing is settled.

A MULTIPLICATION OF OBSTACLES

The Sri Lankan slump has not not materialize suddenly. The last thirty months of pandemic and Russian war in Ukraine have confused public finances and people's daily lives.

Corruption and bad decisions by the authorities have ended up undermining the national economy: from several billion dollars when Gotabaya Rajapaksa came to power in 2019, foreign currency reserves amounted to only one million dollars when he left on Tuesday last.

Sadly, Sri Lanka is not alone in this impasse. Last week, the Managing Director of the International Monetary Fund, Kristalina Georgieva, sounded the alarm over the accelerated indebtedness caused by the COVID-19 pandemic: “30% of developing and emerging economies, and 60% low-income countries are on the verge of over-indebtedness. »

THE FIRST DOMINO TO FALL?

The list of countries whose indebtedness increasingly worries the IMF and the World Bank continues to lie down. To Zambia, Chad and Ghana have recently been added Ethiopia – the second most populous country in Africa – and Pakistan which, with its 220 million inhabitants and its nuclear arsenal, gives specialists nightmares. of the region.

China, with the major projects of its “New Silk Roads”, weighs heavily in the finances of these countries. In Africa, for example, what Djibouti and Angola owe to their Chinese creditors exceeds 40% of their national wealth!

Sri Lanka has borrowed heavily from the Chinese, often short-term debt, which the country had to pay for by borrowing more… the royal road to bankruptcy.

What remains striking in this crisis is the speed with which everything fell apart. There are only four years between 2018, when the Sri Lankan economy was the envy of South Asia, and 2022 when no one has any idea how to tear themselves away from the torpor it is so intense. A universal lesson: let's stay on the lookout too!

SRI LANKA, THE PEARL OF THE INDIAN OCEAN

< p>Country with the highest external debt to China