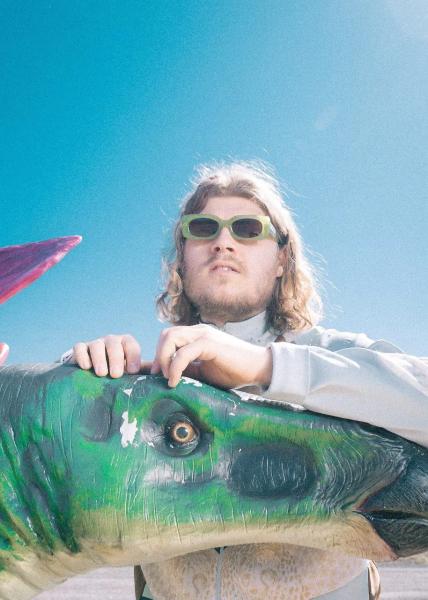 For his third album, an opus he titled AMERICA, Simon Kearney decided to go fully with his desires, his desires and his pop'n'roll.

Three years after the disc Open House, the author, composer, performer, multi-instrumentalist and producer, who has been living on Île d'Orléans for four years, is fully and guilt-free in 12 new songs.

“C' is an album without compromise. Things are really at their peak and over the top. I'm getting closer and closer to my everyday personality and what represents me. I'm very proud of this album,” he said at a roastery in Quebec's upper town.

He explains his approach .

“Pop'n'roll sounds like rock'n'roll. There's this rock 'n' roll energy that reminds me of our grandparents going out dancing and being told it was the devil's music. There is pop forward because I accept my guilty pleasures and pop is a very big one for me. The amalgam between these two words represents my style of music”, he described.

The 26-year-old musician spent four years thinking about a theme and sound direction for an album that would become AMÉRICA. He lists, among his inspirations, the names of Dua Lipa, Bruno Mars and his idols, Prince and Beck.

“I have a growing interest in American pop. That's what I wanted to exploit. Yes, we live in Quebec, but we are also Americans. We can make music as good and if not better than that which is made in our neighbors to the south. And that's what I'm trying to demonstrate with AMÉRICA,” he said.

In his studio on the Island

Simon Kearney conceived and recorded much of AMÉRICA in the studio set up in his house on Île d'Orléans.

“I had two bedrooms. One large and one small. I chose to transform the largest into a studio. There is a drum set, six basses, a dozen guitars, synthesizers and two double basses. It's my playground. I try to make music there and create beats every day,” he said.

We find , on AMERICA, the presence of rapper Steve Beezy, Lou-Adriane Cassidy, the Gabrielle Shonk and the ESCA Quartet and Dominique Messier, drummer for Céline Dion.

In the texts of AMÉRICA, Simon Kearney talks about the importance of believing in your dreams, going after your ideas and never giving up. As on the title Aweille!

“It says: Get your ass off the couch and take it, your tank, if you want to go out west to live your trips. Do it. I try to keep it simple. The more I advance in this profession of author-composer, the more I try to make simple texts which have stronger images”, he said.

A big fan of Leloup

The first single from this album, a piece entitled JeanLeloup, released this spring, received radio airplay.

“I am a big fan. He is for me a fine example of freedom of expression. He does what he wants to do without taking into account the eyes of others. He doesn’t give a fuck and I appreciate that,” he said.

During the creative period, Simon Kearney got through the pandemic without suffering too much. He has done directing work for Étienne Coppé, Jérôme 50, Kinkead and Émile Bilodeau.

He also hosted the web series Plaisir coupant in the spring of 2022.< /p>

“It was really fun,” he said, adding the words “you never know” regarding a possible second season.

AMERICA is on all digital platforms and on Oziko.com.